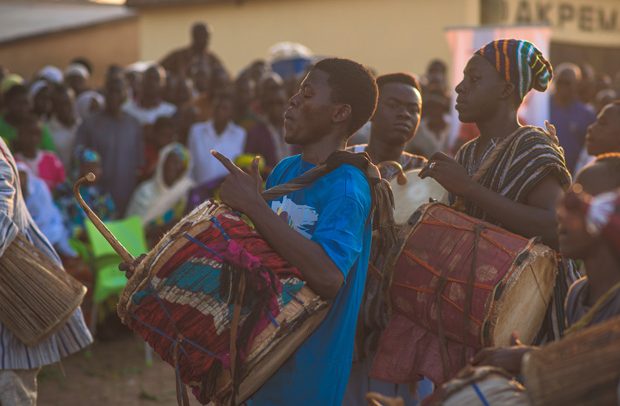 One of the dance groups performing at the event

Citi TV’s night of cultural dance exhibition at the Dakpema Palace in Tamale was a night to remember as the event provided a rare opportunity to showcase the unique dances of the Dagombas.

Hundreds of residents, including some foreigners, thronged the forecourt of the Dakpema Palace after sunset on Friday to witness energetic dance performances such as jara, tora, nagbegu, takai, simpa, baamaaya, gonje among others.

Citi TV organised the night of cultural dance exhibition to give this year’s Damba a unique flavour. Most of the patrons of the event were not disappointed.

In an interview with Citi News, the residents described the exhibition as a moment to savour.

“I hope and pray that more people like Citi TV will cover this kind of occasion. We have a lot to show Ghanaians and the whole world and so we thank you very much for coming,” a gentleman said.

“We thank Citi TV so much for covering Damba Festival. This is the first time our festival has been covered by a media station. Because of what you have done, we would now watch Citi TV more then we used to,” a lady also added.

“I thank the Almighty God and I’m very happy. If I go back to Accra, I’ll talk to my brothers and neighbours that Dagbon is united now,” another man stated.

Citi TV was the official media partner for this year’s Damba Festival, which is a traditional festival among most ethnic groups in northern Ghana.

This was part of the firm’s resolve to project culture and tourism in Ghana.