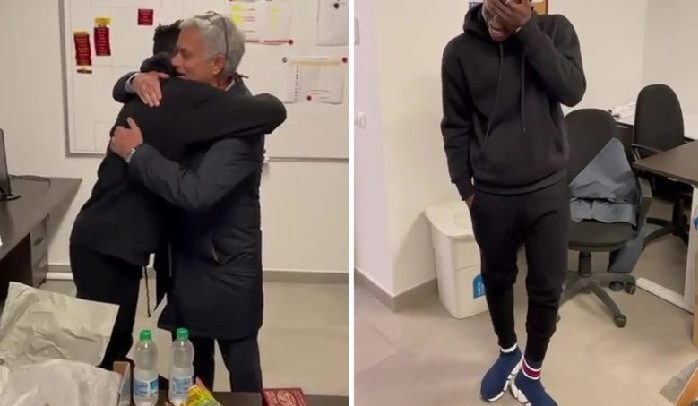 Afena-Gyan and Mourinho hugged each other in heart-warming scenes

Felix Afena-Gyan believes there was no racist intent in a comment overheard when he was gifted a new pair of shoes following his first senior goals for Roma.

Roma’s win against Genoa on Sunday prompted Jose Mourinho to buy 18-year-old goalscorer Afena-Gyan a new pair of shoes worth £670 (€800).

A video of the gifting was shared online and there was a voice in the background, from an unidentified person, who commented ‘there are bananas inside’.

Afena-Gyan was also encouraged by a voice behind the camera to dance and he obliged. A number of fans picked up on the comments but Afena-Gyan does not think there was any racist intent or malice behind it.

He said on Instagram: “I want to assure you all that I was not offended by the background comment made in the video in any way – and that I truly believe there was no racist intent.

“Since the first day I arrived at the club, I have been welcomed into the family by everyone, who have joked with me like they do all members of the family.

“Because they see that I eat bananas a lot, that has become a thing we laugh about sometimes – and I believe the comment was another example of that.

“I feel at home here at Roma and I have done ever since I arrived. I am grateful for the support I have received from everyone here at Trigoria and don’t like to think that people have got the wrong idea about things.

“Thanks for your concern, now let’s get back to concentrating on the next game. Grazie and Forza Roma.”

Speaking after the game, Mourinho had joked that the celebration for the first goal, when the player ran over to his manager, allowed Afena-Gyan to remind him of a deal they had agreed before the game.

“I promised him a very expensive pair of shoes, for €800, and he came to me to make sure I didn’t forget,” he told broadcaster DAZN.

“I really like his coldness, his physicality but above all his humility.”

The Portuguese kept his word and purchased a pair of shoes for the teenager and presented it to him on Monday at Roma’s training ground.

In a clip posted on Instagram by Afena-Gyan, the striker can be seen opening a box containing the shoes, while Mourinho and his teammates urge him to try them on.

Speaking after his match-winning performance at Genoa, which lifted Roma up to fifth in Serie A, the 18-year-old heaped praise on Mourinho.

“He is teaching me a lot and I am learning a lot from him,” he said.