‘I’m Satisfied With Operations So Far’ 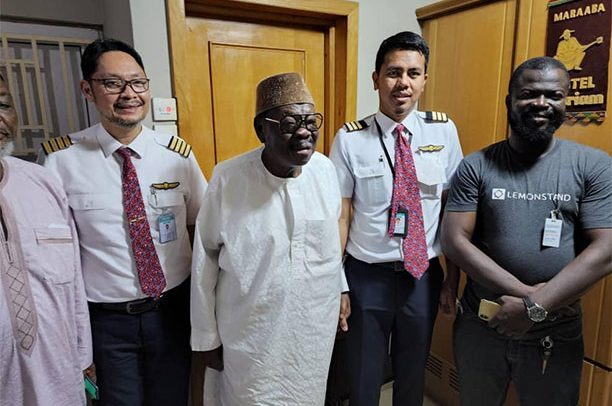 Sheikh I.C. Quaye and an official of the Tamale operations pose with the pilots of the Saudi aircraft

Following the drawing of the curtains over the airlift of pilgrims from the Tamale end of the country, the Chairman of the Ghana Hajj Board (GHB) Shiekih I.C. Quaye has expressed satisfaction with Hajj 22 so far.

He had earlier visited the Tamale International Airport to see the preparations for the maiden airlift during which he was welcomed by his staff on the ground.

Besides appraising himself with the operations, his presence boosted the morale of the staff involved in the stressful pre-departure processes.

After chatting with staff, he observed at first hand the pre-departure formalities and interacted with passengers.

Preparations for the commencement of the Accra chapter of the exercise scheduled for June 30, 2022 barring unforeseen challenges are in full swing.

Pilgrims are already engaged in activities pertaining to the pilgrimage, some of which are visits to historical sites such as the Holy Prophet’s mosque with its striking green dome, and the burial locations of early Islamic leaders like Abu Bakr and Umar.

They have also visited the Masjid al-Qiblatain (Qiblatain Mosque) the site where Prophet Muhammad received the command to change the direction of prayer to Mecca.

About 1,732 pilgrims are already in Saudi Arabia, a figure which would rise when the Accra flights begin.

“We are really excited for this great gesture of the Ghana Hajj Board. We never thought to be this close to the Holy Prophet’s Mosque,” some of the pilgrims said about the proximity.

Ghanaian pilgrims are being housed in modern top hotels at the various locations they are expected to pitch camp during the pilgrimage.