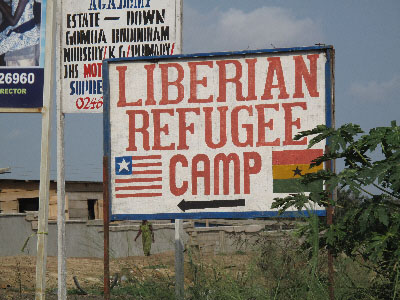 The resistance by ‘illegal’ refugees to be evicted from the Buduburam Refugee Camp in the Central Region is a testimony to the unwavering hospitality of Ghanaians.

Not only have they resisted their lawful eviction by government, they have spewed invectives on government; an impunity which should not go without a reaction.

Ghana is a leader in the West African sub-region when it comes to adhering to international conventions to which she is signatory. Our country would not engage in activities which breach United Nations conventions.

The Liberians at the refugee camp will recall the reception they had from their hosts, the Ghanaian authorities and citizens when they landed at the height of the civil war in their country in the 1990s.

Fortunately, the civil war in their country for which reason they were given sanctuary in Ghana has abated. The United Nations High Commission for Refugees (UNHCR) has, following the cessation of hostilities and a return to peace and democratic governance in Liberia, decommissioned the camp they set up at Buduburam. In fact the camp was decommissioned by the UNHCR more than a decade ago.

The repatriation of occupants of the camp which followed was ample indication that the land reverts to its owners.

There is no doubt that people who live in a place for as long as the illegal refugees have in Buduburam exhibiting reluctance in moving out. Unfortunately, however, it is the duty of the government to take decisions which best serve the interest of the majority of her citizenry regardless of whose ox is gored.

Government has decided that the former refugee camp be redeveloped to serve the general good of the people of this country and to eliminate the shelter the place offers criminals.

Fighting the state under the circumstances and even raining insults on the authorities will neither reverse the decision nor render the illegal occupants victors in the raging battle against eviction.

The date for the eviction has elapsed but that does not mean the illegal occupants of the location have won. Move they will and the government redevelopment project will come on.

We have also taken note of the points raised by some of the illegal refugees to the effect that they have lived there for long and even given birth to children, realities which for them legitimizes their occupation and makes them citizens.  Of course, this is an outrageous claim which suggests how naive its source is about citizenship.

Perhaps those making such spurious claims should go to the Ministry of the Interior or the Ghana Immigration Service (GIS) and learn more about how to gain the citizenship of this country if they so wish.

We also wish to call on the relevant authorities to activate the process of evicting the occupants of the place which best serves the interest of criminals than the country in general.

The Gomoa East District Security Council should contact the Greater Accra Regional Minister Henry Quartey for lessons on how to tackle the seeming insurmountable task of eviction.

Capitulation by government is not an option in the task that lies ahead.