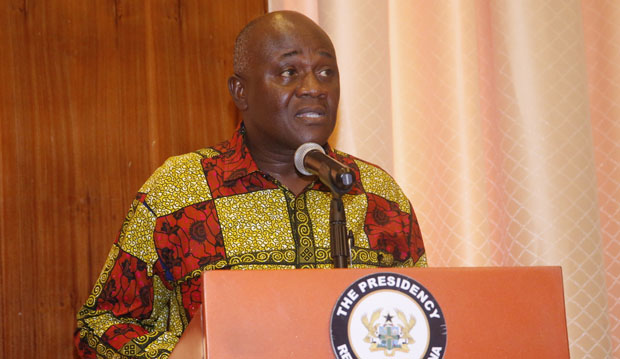 Stakeholders at a national forum on performance audits have called for the institutionalization of the assessment process as a means of strengthening accountability mechanisms within the country’s public financial management system, particularly at the local level.

The forum, organized by the government through the Ghana Audit Service in partnership with the United States Agency for International Development (USAID), formed part of activities under the Ghana Strengthening Accountability Mechanisms (GSAM) activity.

Minister of Local Government, Decentralization and Rural Development, Dan Kwaku Botwe, in a speech read on his behalf said one of the ways to foster self-reliance, discipline, transparency and accountability was to give the citizenry a say in how their resources are managed.

He, thus, commended the GSAM activity which empowers the citizen to demand accountability from those whom resources have been entrusted on their behalf. “The process, thus strengthens our drive as a government to promote Social Accountability and building the capacity of Ghanaian institutions and local citizens engagement,” he said.

He also supported the call for increased capacity building for citizens to improve their level of engagement with duty bearers, especially at the local level.

She said the impact of the performance audits in strengthening accountability governance in the district assemblies has been positive.

“For example, the number of abandoned projects in the targeted districts has reduced from 33 per cent to 8 per cent,” she said. “Twelve education projects, six health facilities and two sanitation projects which had been delayed for a number of years have also been completed and in use after the performance audits.”

Deputy Chief of Party, GSAM Activity, Samuel Boateng said the activity has made significant progress towards improving the country’s decentralization process with an emphasis on citizen participation.

“Over 200,000 citizens in 100 districts have had the opportunity to engage with their district authorities on issues of capital projects planning and implementation and to demand an improved performance also, through training, 25 local civil society groups have gained new capacities that empowers them to collaborate with citizens to influence local decision-making processes and support development in local communities,” he said. “We need the central government to provide resources and commit to its sustainability.”

Assistant Auditor General, (Performance Audit) Ghana Audit Service, Jacob Essilfie, presenting the analysis on the performance audit of 50 districts assemblies under the GSAM activity said District Assemblies are the foundation unit of development and as such needs to be strengthened to be pillars of national development.

It noted that 68 per cent of the 50 assemblies that were subjected to the performance audit budgeted for their projects, however, several assemblies failed to prepare supplementary budgets for the projects for.

He recommended that the Ministry of Finance and the District Assembly Common Fund DACF Secretariate should check assembly projects submitted for the release of fund with their alignment with their development plans and yearly budget before approving their funding.

‘The Public Procurement Authority (PPA) should increase its monitoring role on the procurement process in the Assemblies and make follow-ups on the assemblies for the implementation of PPA audit recommendations,” he said.