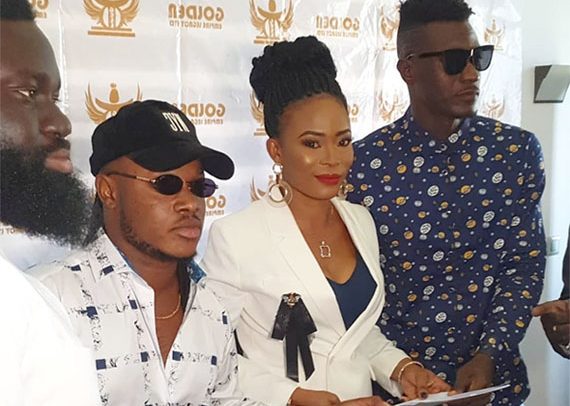 Ghanaian music duo Keche has signed a $500,000 record deal with Golden Empire Legacy Limited, a gold dealership that has been existence in the last 13 years.

The deal will last for two years and is also renewable. It comes with other packages, including a three-bedroom house each and an Elantra car each for the duo.

The deal has come at a time some music groups in the country are collapsing.

The deal was unveiled at a short ceremony held at the Golden Empire Legacy offices in East Legon, Accra, on Tuesday afternoon and both parties looked excited to be in business.

The CEO of Golden Empire Legacy Limited, Joana Gyan, told NEWS-ONE that signing Keche means a lot to her and her company.

That, she indicated, has provided an opportunity for the company to support the society through the music industry.

“For me, I am very happy today and it means a lot to Golden Empire Legacy. We are happy today is the day we are also giving back to society to help someone in Ghana that everyone knows. We hope to do more for other people and artistes,” she stated.

Keche also told the media that it always been their dream to work with bigger brands that would take their career to the next level.

They have, therefore, congratulated Golden Empire Legacy Limited for their decision to sign them.

“We have been praying for this all these years. We really want to cut across Africa. We had always wanted to be one of the biggest artistes in Africa and so we need bigger brand like Golden Empire to help us achieve it. So we are grateful they have come on board,” Joshua of Keche indicated.

Keche‒ made up of Joshua Ampah and Andrew Cudjoe‒ is currently one of the most consistent and versatile music groups in West Africa. Joshua is a rapper with the power of word play and Andrew is a songster with a silky voice. Both born and raised in Takoradi in the Western Region of Ghana, their musical journey started very early in life as they both started singing at Sunday school and through basic education.

They released their first radio single in 2008 titled ‘Omegemi’, which was a huge success. They followed up with ‘Ring My Bell’ featuring Sarkodie the following year. They have since had hit songs like ‘Pressure’, ‘Sokode’, ‘Slow Motion’, ‘Aluguntugui’, ‘Diabetes’ and more.