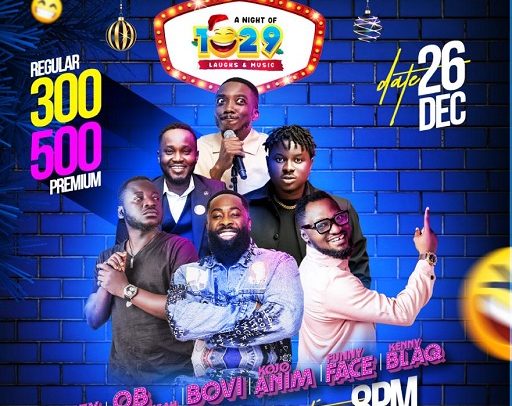 Charter House, the organisers of the Night of 1000 Laughs and Music series, is set to present yet another exciting edition of the popular comedy and music series on December 26 at the Grand Arena of the Accra International Conference Centre (AICC).

The 1029 laughs and music will be a unique experience worth being a part of, and it is expected to draw comedy fans from across the capital.

Comedy fans are sure to enjoy some hearty laughs at the jokes presented by some of the best stand-up comedians.

The Nigerian comedians scheduled to appear on stage, include the hilarious Kenny Blaq, Bovi among others.

The comedians, who have been phenomenal on several stages, earning for themselves titles, are expected to put up some rib-cracking performances to entertain comedy fans who will grace the event.

The event will also feature some of the very best musicians such as Kuami Eugene and Cina Soul who will mount the stage to thrill fans.

There will also be other surprise performers on the night to complete the excitement.

The Night of 1029 Laughs and Music is powered and produced by Charterhouse, with support from YFM, Peace FM, Okay FM and Duks.