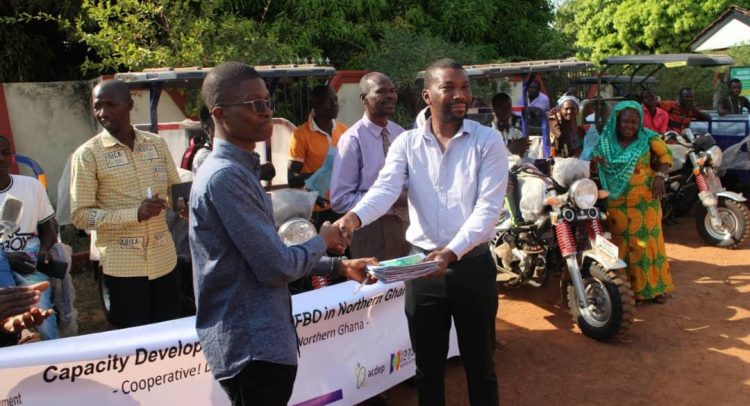 Farmers in the northern zone have been receiving the support since 2017 through the Capacity Development of Farmer-Based Cooperatives and Farmer-Based Organizations (FBCs/ FBOs) Project.

As part of the project implementation, KOICA presented implements worth over $ 50,000.00 to 20 Farmer Cooperatives within the project intervention areas.

The gesture which falls under the Pilot Project and TOL (Training of Farmer Leaders) Action Plan Support components of the project, represent one of several presentations made by KOICA in recent times.

The KOICA FBCs/FBOs project which is being implemented in the five northern regions of Ghana in collaboration with the Ministry of Employment and Labour Relations through the Department of Cooperatives is funded by the Government of the Republic of Korea with a grant aid of $ 6,180,000 to be disbursed over a 42-month period.

Some of the items presented to the beneficiaries include 17 motorking tricycles, grinding mills, irrigation systems and a tractor.

The Registrar of the Department of Cooperatives, Charles Yaw Offe, who received the farm implements on behalf of the farmers, thanked KOICA for the support and assured them that they will be use for the purposes for which they were donated to the farmers.

He however, warned beneficial farmers that the farm implements will be retrieved from awardees who do not use them for the purposes for which they were given.

Madam Mahama Sabratu, a beneficiary of the initiative thanked KOICA and ACDEP (the Project’s Implementing Partner) for the support. She remarked that some of the donated items such as the motorking tricycles will be useful in ensuring that farm produce are conveyed to market centers in time to minimize the incidence of post-harvest losses resulting from decay or spoilage.

Mr. Francis Akakpo, the Program Officer for KOICA Ghana urged beneficiaries to use the implements to increase their productivity for the benefit their families and the country as a whole.

Ghana Close To Declaring Kidney Disease As An Epidemic