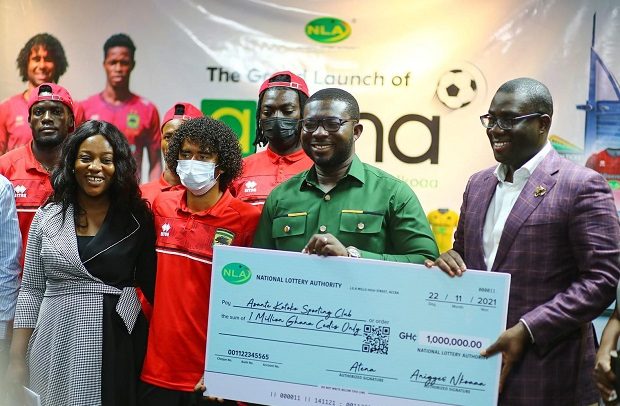 Kotoko CEO, NLA boss, some players and officials of the club displaying the dummy cheque. INSET: Nana Yaw (L) and Awuku (With signed documents) in handshake

Asante Kotoko and National Lottery Authority (NLA) yesterday announced the signing of a partnership valued at 1 million Ghana Cedis (over $160,000).

It was sealed with the launch at Golden Tulip Hotel in Kumasi, making NLA the newest partner of the Ghanaian giants.

This deal comes on the heels of betting company Betika agreeing a two-year partnership deal worth 1.3 million Cedis few days ago.

NLA boss Samuel Awuku, a staunch Kotoko fan was present to witness the momentous occasion and said, “I am happy that the NLA as it approaches its 60th anniversary next year have partnered a club with the pedigree of Kumasi Asante Kotoko to introduce another innovation in the lottery and football circles as it sought to enter the digital space to reward the supporters and well-meaning Ghanaians.

“I thank the Life Patron of the club – Asantehene Otumfuo Osei Tutu II, Board and Management of the club for this wonderful partnership and I urge the fans of the club to patronise the Atena Game to rake in some revenue for the club.”

According to reports, NLA will announce a similar deal with Kotoko’s sworn rivals Hearts of Oak in the coming days.

Pochettino Pops Up As New Man U Boss