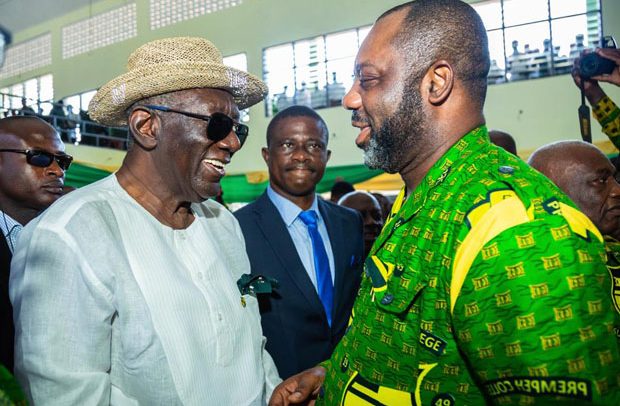 Former President Kufuor in a chat with Dr. Matthew OpokuPrempeh

Former President John Agyekum Kufuor has called on the government to continue to implement positive policies and programmes to better the living conditions of teachers in the country.

He stated that teachers are very important in the educational sector, especially regarding ensuring quality education in the country; therefore, they should be pampered and be properly catered for at all times.

Addressing a huge audience during the 70th anniversary of the Prempeh College in Kumasi on Saturday, the former president said, “Teachers are very crucial in our hope of ensuring quality education in the country. They always act in place of parents and guardians with regard to character formation of our children.

“In this regard, I am pleading that government should step up efforts to better the lives of teachers so that they would feel motivated to passionately teach our children properly,” he said.

Mr. Kufuor also admonished the government to work towards ensuring equitable teacher-to-student ratio in the various senior high schools to in order to ensure efficiency in the classrooms.

He also called on parents and guardians to pay attention to the character formation side of children in their upbringing and advised them not to allow “your tight work schedule to take over your life.”

On his part, President Akufo-Addo stated emphatically that his administration is determined and ever-ready to implement new policies to help improve the lives of teachers.

According to him, plans have been put in place to institute measures that would make it possible for teachers to purchase their own homes so that they would not struggle after retirement.

He said more would be done by the government to help improve the living conditions of teachers further, lauding President Akufo-Addo for the massive infrastructural growth at Prempeh College.