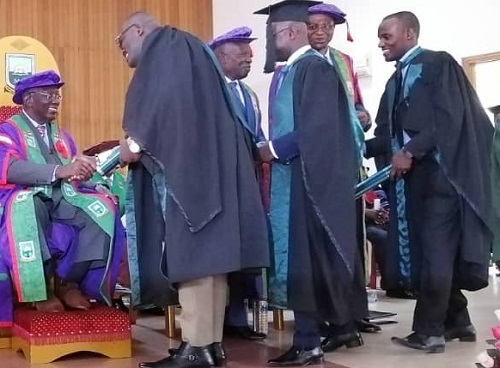 Former President Kufuor (seated left) congratulating some of the graduates

Former President John Agyekum Kufuor has called on the government to make it possible for universities to retain the services of teaching personnel at least at the age of 70 years as pertained in many other countries.

“I urge the government to take a critical look at university teachers who are retained on contract to work in the public universities after attaining the retirement age of 60 years. These teachers tend to be ‘la crème de la crème’ in our universities and are mostly the ones handling postgraduate programmes and supervising PhD students due to their experience and expertise,” he said.

Former President Kufuor who is also the Chancellor of the University of Science and Technology (UMaT) in Tarkwa in the Western Region made the appeal at the 11th Congregation of the university on Saturday.

He also called on the government to prioritize increment in the Academic Facility User fees to enable public universities to continue to deliver on their mandate of providing quality education.

He said for Ghana to realize the laudable “Ghana Beyond Aid” agenda there was the need for massive investment in the institutions to carry out quality scientific research and training.

The investment, he indicated, would also improve the universities’ capacity for innovation and promote university-industry collaboration.

He praised the administrators and staff of UMaT for working assiduously to achieve the vision of becoming the premiere institute of technology in Africa.

He pleaded with the Board of the Mineral Development Fund to urgently consider releasing the necessary funds to speed up the completion of the legacy projects on campus.

A Deputy Minister of Education, Gifty Twum Ampofo, said that the government appreciates the need for some staff beyond the age of 65 to be retained but added that “we are advised that there are constitutional implications of maintaining such staff on government payroll, and that rather, they should be paid from Internally Generated Funds (IGF).”

She added that there would have to be a constitutional amendment to increase the age of retirement to bring such faculty members within the constitutional framework, and that Parliament was in the process of considering that.

The Vice-Chancellor, Prof Jerry Kuma, mentioned that the university through a series of innovative processes in teaching had produced graduates whose quality outmatched their competitors trained elsewhere.

In all, 494 students graduated at various levels. Out of the number, five were awarded Doctor of Philosophy Degrees.