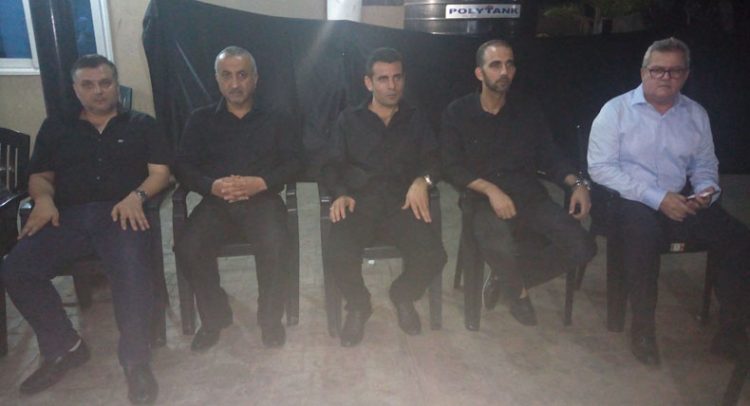 Younes (right) with other sympathizers at the memorial service

A solemn memorial service has been held in Accra for Hajj Ahmad Saffeidine, the Lebanese, who was shot dead by armed robbers in Tema last week.

Hundreds of Lebanese in the country, including the new Lebanese Ambassador to Ghana (Charger de Affair) Ali Kazan and other expatriates attended the event held at the Lebanese Culture Centre at East Legon on Sunday night.

HE Kazan expressed sorrow over the death of the businessman, who lived in Ghana for over 20 years.

He said, “It is unfortunate, but we trust and have confidence in the security system of this country, and we are counting on them and the Ministry of Foreign Affairs.

“It is the first of its kind in Ghana. The country has been good to us, and that is why I refer to it as unfortunate. We hope it will not happen again. We are not happy at all. I believe the armed robbers had tips, they tracked him, they were stubborn and he resisted them but couldn’t survive.”

On his part, Hisham Younes, a member of the Lebanese community, said the security services have promised to thoroughly investigate the matter.

“A committee has been formed at the Lebanese Embassy, and we will visit the IGP, Minister of Interior to follow up on the investigation. We hope that we will have the results soon, we have confidence in them. Hajj was a good and disciplined man.”

The Lebanese Community flew the body of the deceased from Accra last Thursday to his family in Lebanon and has since been buried.

He left behind a wife and three children.

The armed robbers killed Hajj in a scuffle and made away with GHC200,000.