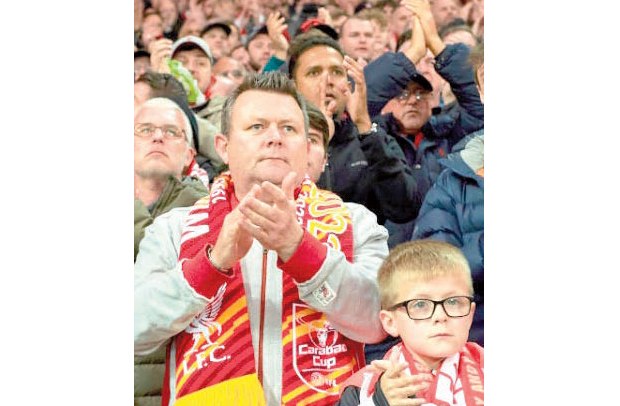 Fans of both sides applauded on the seventh minute

Manchester United and Liverpool supporters united in a fan-led minute of applause at Anfield in support of Cristiano Ronaldo and his family, following the death of his baby boy.

A United shirt with Ronaldo’s name and number was held up in the away end.

The Portugal international missed Tuesday’s match between the two rivals.

On Monday, Ronaldo and partner, Georgina Rodriguez, announced the death of their baby boy, saying it is the “greatest pain that any parents can feel.”

Their baby girl survived, and they said her birth “gives us the strength to live this moment with some hope and happiness.”

“Our baby boy, you are our angel. We will always love you,” they wrote.

Both United and Liverpool players wore black armbands in a mark of respect to Ronaldo and his family.

Before the match, which Liverpool won 4-0 to go two points clear at the top of the Premier League table, United’s interim boss, Ralf Rangnick, said there were more important things in life than football.

“The whole team, the whole club is with him [Ronaldo],” added Rangnick.

“For me, it was clear he has to be where he is now with his family.”

Liverpool manager, Jurgen Klopp, called the applause in memory of Ronaldo’s son his “moment of the game.”

“So many things are much more important in life than football, we feel for Cristiano and his family,” Klopp said.

“That is exactly how football should be, with all rivalry aside at this moment. There is only one thing that is important, and it was a show of class. All our thoughts, from the moment we heard about it, are with Cristiano and his family.

“I cannot even imagine how it must be, and we really feel for him,” he added.