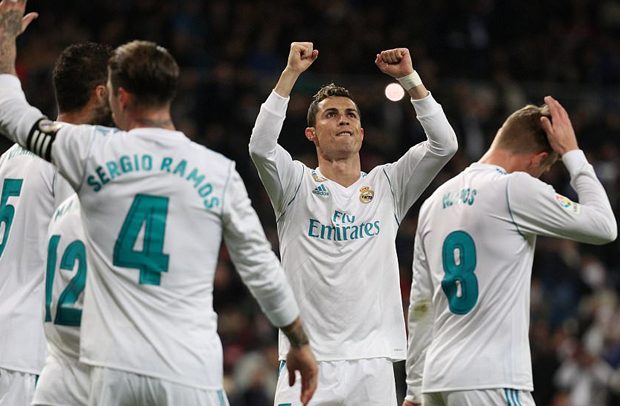 Ronaldo the scored a hat trick in the second half

Real Madrid’s 5-2 hammering of Real Sociedad in Saturday evening’s La Liga clash at the Bernabeu was an ideal warm-up for Paris Saint-Germain in the Champions League midweek, according to Blancos coach Zinedine Zidane.

Madrid were in front inside 50 seconds when Lucas Vazquez headed in Cristiano Ronaldo’s deep cross. The goals kept coming as Ronaldo converted Marcelo’s pull-back, Toni Kroos curled to the top corner from 20 yards, and before half-time Ronaldo had made it 4-0 by heading in Luka Modric’s corner.

There was a lull before Real Sociedad substitute Jon Bautista got one back with a quarter hour remaining, Ronaldo completed his 43rd hat trick for the club after Sociedad goalkeeper Gero Rulli had spilled substitute Gareth Bale’s 20 yarder. Ex-Madrid midfielder Asier Illarramendi volleyed home from close range late on.

The Los Blancos coach told the post-game news conference that the intensity and determination of the first half performance was just what he wanted when PSG visited the Bernabeu for Wednesday’s UCL last-16 first leg.

“Everything positive was what we wanted from the start,” Zidane said.

“It makes things easy when you score in the first minute. It was the full first half in this way, intense, determined, motivated. We can be satisfied with this, the three points, it was a good way to prepare for Wednesday’s game.”

“Karim had chances to score, he didn’t. But the important thing is to think about the next game, and think that someday he will score, and his [bad] run will end.”