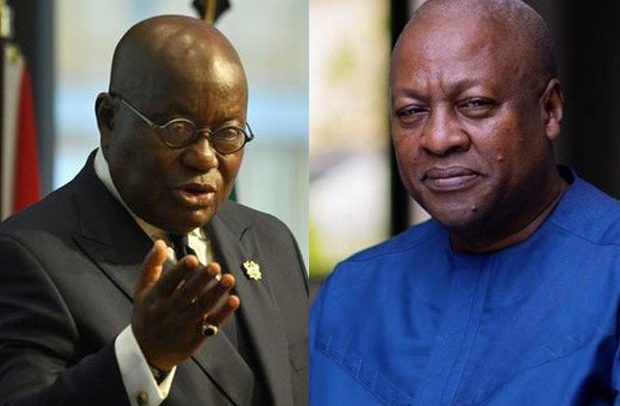 Mr. Mahama is campaigning in the Upper East Region ahead of the crucial December 7 general elections, and he claimed in Tuobong in the Tempane District that in 2015 he started the Free SHS, which had been Nana Akufo-Addo’s campaign tool since 2007.

“We started the programme (Free SHS) and the NPP came and continued it. Unfortunately, the implementation has been very poor, and so it ended us in double track. I assure you my country men, that within a year, I will cancel the double track,” Mr. Mahama said on Tuesday.

President Akufo-Addo yesterday reacted to Mr. Mahama’s claims, albeit in shock, and cautioned the NDC flag bearer who was defeated heavily in 2016 as an incumbent, to back off the policy because neither he nor his NDC party had been in favour of it, let alone implement it.

Addressing NPP supporters at Odorkor Lorry Station in Accra as part of his Greater Accra regional tour, President Akufo-Addo said, “I heard something yesterday that surprised me. The former President stated that my promise to start the Free SHS policy was false and just a ploy to deceive Ghanaians. He was strongly against the policy and stated that if he had the money to implement that policy he would use it for something else. He also said it would take Ghana years to implement it but now he is saying he started the Free SHS, and it is surprising.”

He said, “It is unfair for the former President to try to become President using deception and lies. He has seen that his campaign is collapsing in confusion and fabrications, and so he is now using outright lies to try and amass votes.”

President Akufo-Addo urged Ghanaians to disregard the claims by Mr. Mahama and his NDC and support the NPP government to deliver for them.

Mr. Mahama in February made an astonishing claim in Sienchem in the Asutifi South Constituency in the Ahafo Region to the effect that he brought about the now highly acclaimed Free SHS policy.

Currently, through the effort of President Akufo-Addo, about 1.2 million children are studying and being fed free of charge at the senior secondary level.

Mr. Mahama had told the gathering that he started the Free SHS programme, claiming it was meant for day students.

“Free SHS is good. If anyone stands anywhere and says that I, John Mahama, will cancel Free SHS, tell the person he or she is a liar,” adding, “I haven’t said anywhere that when we come to power we were going to cancel the policy. We started it with day students and we were going to expand it when, unfortunately, we left office.”

The former President then said that during his tenure, he planned that if all the kids went to school at once, it was going to be a problem for his government, so he decided to build more schools and subsequently started the 200 Secondary Schools project which came to be known as E-Blocks, saying, “There are about 600 schools in the country and we decided to build 200 more.”

Interestingly, by the time Mr. Mahama left office, only 23 out of the 200 schools had been completed, and only five were funded by his government, with the rest being financed by the World Bank.

The NPP government within three years has been able to complete additional 30 or so E-Blocks.

Mr. Mahama’s position on the Free SHS continues to be questioned by his opponents, especially members of the ruling NPP, who have ensured the implementation of the laudable policy.

Last year, Mr. Mahama, speaking at the 27th  Annual Residential Delegate Congress organized by the Ghana National Union of Technical University Students in Kumasi, stated “Free SHS is here to stay,” an assertion that contradicted the moldy entrenched hostility exhibited by the NDC against the Free SHS policy since 2008 when Nana Akufo-Addo promised it.

It is on record that former President Mahama and the NDC in 2012 sponsored over 46 radio and television adverts against the Free SHS policy alone and even said Ghana was not ready for the Free SHS policy because other countries could not implement it and that it was coming from a ‘desperate politician’.

Notable utterances by high-ranking members of the NDC against the policy are in the public domain, with Mr. Mahama himself leading the charge.

He said at Okere in the Eastern Region that Free SHS would collapse the education system of Ghana. Besides, at the University of Cape Coast in 2016 as President, he said the Free SHS by the NPP was a ‘political gimmick’.

In Tarkwa, during an NDC so-called Unity Walk, Mr. Mahama strongly rejected the Free SHS policy, stating that it was unwise to implement it, and said on November 25, 2017 that “Lalasulala Free SHS will fail.”

On October 1, 2018, Mr. Mahama reiterated his aversion to Free SHS by stating it was unthinkable to spend GH¢2 billion on Free SHS, and that it was seriously constricting government’s budget.