Mahama Sparks Fury Over His Veep 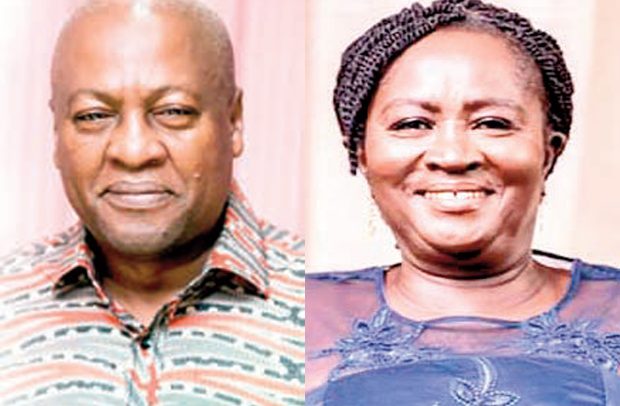 Former President John Dramani Mahama’s comment that appears to suggest that he is the one giving the ‘chance’ to women to climb the political ladder has sparked heated debate.

After selecting former Education Minister Prof. Jane Naana Opoku-Agyemang as his running mate for the December general election, the NDC flagbearer took to social media to create the impression that it is the NDC that is willing to give women the chance to shine in politics.

Unfortunately for the former President, he has unwittingly stoked gender polemics on social media, thereby exposing the underbelly of his running mate.

His tweet, which generated it all, sought to earn for him plaudits for a seeming favour to the feminine gender, but the backlash points at a counterproductive outcome.

Some social media followers have even questioned about the import of the ‘willingness’ aspect of the construction which for them implies a favour which could have been denied.

Others too think the NDC still thinks women can only manage the position of a running mate or at best Vice-President and not the ultimate – Presidency.

Another significant reaction described Mr. Mahama’s tweet as self-serving the choice of words of which is faulty; “willing to let women’, ‘to let women’. For this person it is ‘as though women have no autonomy and you decide when their time has come’.”

The assortment of posts in reaction to the tweet represents the antagonistic reactions to the flagbearer who might have to return to the drawing board with a more attractive post.

He had also described his running mate as a distinguished scholar with an international respectability ending with a gratitude to this party’s executives for what he described as their massive support for the choice of the female professor.

One of the reactions recalled her tenure as Education Minister when schools suffered an unprecedented dearth of chalks. The poster questions her suitability having in her previous position as minister failed to meet the expectations of Ghanaians. A rhetoric question “how sure are you that she is the best choice?” showed up.

Following was another inclement one which referred to the choice as a ‘facelift’ and quickly set the choice of Prof. Jane Nana Opoku-Agyemang was made because there were no options open for the flagbearer and the party, as it were. “Who else could have been credible enough in your party?” a sarcastic question followed.

As a factor in rating the Mahama tenure, one person noted that she was part of his “monumental failure. She’s a fruit of the poisoned tree; she’s no good.”

He too concluded that “there is no better option than what you have finalized on.”

A lone voice said she would surely make women proud.

One of the dissenters explained that while he does not have a problem with the gender factor for the choice, however, demurs with the ‘scholar and respected internationally’ reasons.

Someone while mocking the former President’s efforts at marketing the Prof. Jane Naana Opoku-Agyemang choice described it thus, “they are now selling her like fish in the market”.

The ordeal Lydia Alhassan the widow of the late Member of Parliament (MP) for the Ayawaso West Wuogon Constituency when she was the then NPP candidate in the by-election which took place upon the death of her husband was recalled by one of the tweeters.

NDC MPs described her as ‘a bloody widow’ following the strife which erupted during the by-election.

“If it’s about others it’s a bloody widow empowerment, but if it’s them it’s a women empowerment. Get ready because you people started it by calling Ayawaso MP bloody widow, If you live in a glass house don’t throw stone (Sic),” a reader posted.

The NDC claims that Prof. Jane Naana Opoku-Agyeman’s choice is a gender novelty was debunked with a historical record by one of the dissenters who posted “in fact, we’ve witnessed female presidential candidates in this country, so yours is not the first and of course it isn’t gonna be the last. Stop playing gender sympathy and work things out (Sic).”

He posted that even though they are for women “we won’t fall for women who allow men to use their power to steal and later remain empty crying for sympathy. If it’s right then do it right. Bless!!!’

Another fact which popped up in the tweets was the NDC’s use of the then Candidate Akufo-Addo’s age as a factor as one person posted “she’s 69 years old … you said Nana Addo was too old for the president when he was 68…what changed?’

The reactions are many but largely inclement to ‘the self-seeking’ post as one person posted. Many went to memory lane to underscore the double standards of the NDC.

‘Opana nobody has ever said the time is not right. Nana Konadu and Akua Donkor all stood as presidential candidates. Papa Kwasi Nduom chose Briggette as his vice. Don’t make it look like you have done something exceptional. You are just following the crowd as always. Be original,” is one of the many posts. The list is long seemingly unending.

The running mate’s critics have been quick to point out her ‘faults’ in the political arena.

She made unenviable headlines when she signed the petition to have the infamous Montie 3 released.

This is reference to the three NDC supporters Salifu Maase, aka Mugabe; Alistair Tairo Nelson and Godwin Ako Gun who were jailed for making disparaging remarks about the then Chief Justice Georgina Theodora Wood, including even threats.

Eventually, the then President Mahama pardoned and released the convicts, a move that sparked public outrage.