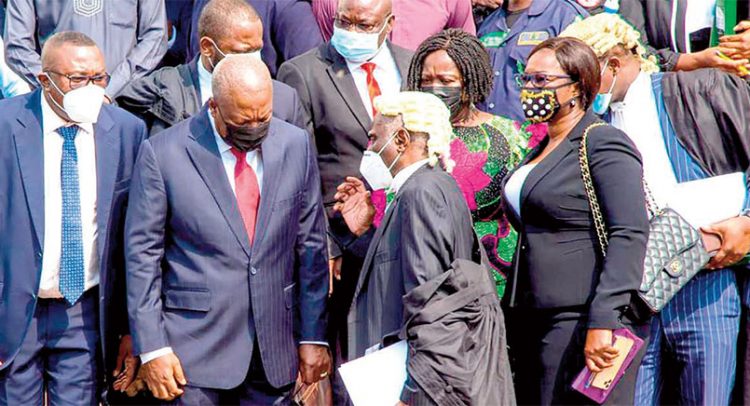 Former President John Dramani Mahama yesterday stormed the Supreme Court where he filed a petition challenging the 2020 Presidential Election which he lost.

The court began hearing the case after it determined a writ for amendment filed by his lawyers praying the court for leave to amend a mistake they made in the petition.

It was this mistake that his lawyers sought to correct by filing a motion for amendment before the apex court.

Chairperson of the EC, Jean Adukwei Mensa, was also present, while President Akufo-Addo, who could not make it to court, was represented by the 2020 election campaign manager of the NPP, Peter Mac Manu.

There was heavy presence of security officers from the Ghana Police Service who were there to maintain law and order.

Although the motion for amendment was seeking to correct an error in the petition, the motion itself was not without an error.

The motion described the action before the court as a writ instead of a petition, which prompted the lawyers for the respondents to oppose the grant of the motion.

Moving the motion, Tsatsu Tsikata, lead counsel for Mr. Mahama, told the court that the petitioner was not asking for a run-off between himself and the EC which is obvious.

The motion was opposed by Justine Amenuvor, lead counsel for the EC who argued that the invocation of the court’s jurisdiction when challenging a presidential election was by a petition and not a writ.

He said in the instant case, Mr. Mahama filed a motion seeking to correct a mistake in a ‘writ’ which makes the whole process a nullity.

Akoto Ampaw, lead counsel for President Akufo-Addo, also opposed the motion to the extent that it sought to amend a part of a writ and as it stood there was no writ before the court.

He said the motion which was seeking to make an amendment, was itself riddled with errors that needed to be corrected.

When reminded that it was clerical error which is in human nature, Mr. Ampaw posited that it was for such reasons that Mr. Mahama should have been lenient with an innocuous error made by the Chairperson of the EC while announcing the result of the election.

A seven-member panel of the court presided over by the Chief Justice, Anin Yeboah, and assisted by Justices Yaw Appau, Samuel Marful-Sau, Nene Amegatcher, Prof. Nii Ashie Kotey, Getrude Torkornu and Mariama Owusu, after rising for some few minutes, granted the motion when they returned to resume sitting.

The court ordered Mr. Mahama to file the amended petition by 4:00pm yesterday, while the respondents had up to 4:00pm today, January 15, 2021 to file their responses.

Meanwhile, the court struck out as moot, a motion by the petitioner praying the court for the proceedings to be telecast live.

Mr. Tsikata told the court that they had filed a motion for the live telecast and the Chief Justice told him that the court had already taken the decision to allow the proceedings to be telecast live on Ghana Television (GTV) thereby making the application moot.

There were notable faces from both the NDC and the NPP who were in court to observe the proceedings.

Vice Presidential candidate of the NDC, Prof. Naana Jane Opoku-Agyeman, former Chief of Staff, Julius Debrah, Samuel Ofoso-Ampofo, Peter Otokunor and Elvis Afriyie Ankrah were some notable faces from the NDC camp that were in court.

Some of the members of the NPP who were spotted included Peter Mac Manu, Kojo Oppong Nkrumah, Henry Nana Boakye, Hackman Owusu Agyeman and Fatima Abubakar.

The former President has alleged among others that there was padding of votes at some centres in favour of the President.

Mr. Mahama in his petition is urging the Supreme Court to annul the results of the December 7, 2020 Presidential Election as none of the candidates who contested the election got the required more than 50 per cent of the total valid votes to be declared President-Elect.

The former President wants the court to order the EC to organize a run-off between him and Nana Akufo-Addo as the only two candidates.

The President in his response to the petition, labeled it as a face-saving gimmick by Mr. Mahama after he had claimed that he won the election prior to the declaration by the EC.

“The instant action is a ruse and face saving gimmick by the petitioner, after the petitioner and many senior members of the NDC party had prematurely claimed outright victory in the election, only to be badly exposed by results of the first respondent (EC), corroborated by all media houses of note in the country as well as many independent local and international observers,” the President argued.

He argues that the petition does not disclose any attack on the validity of the election held at any of the 38,622 polling stations and 311 special voting centres or any of the processes set out for results tallying.

The President avers that Mr. Mahama, from the reliefs sought, claims that none of the candidates obtained more than 50 per cent of the total valid votes cast in the election and therefore seeks a run-off.

However, he does not indicate the number of valid votes or percentages that he or Akufo-Addo should have obtained in the election to support his request for a run-off.

The EC in its response avers that the Presidential Election Declaration Form (Form 13), which is the tally of the 16 Form 12s transmitted, without the results of the Techiman South Constituency, and showing the total votes cast and the total valid votes, shows that President Akufo-Addo won the December 7, 2020 Election.

It further argues that the figures from the results converted into percentages showed that Nana Akufo-Addo had obtained more than 50 per cent of the valid votes, which met the constitutional threshold for election of President under Article 63(3) of the constitution.

The EC also denies allegations of wrong aggregation and vote padding in some constituencies and describes the allegations as misleading and self-serving.

NPP MPs in Parliament at 4am over Minority/Majority showdown