Man, 63 Arrested for Allegedly Defiling 3 Girls, Impregnating One In Tamale 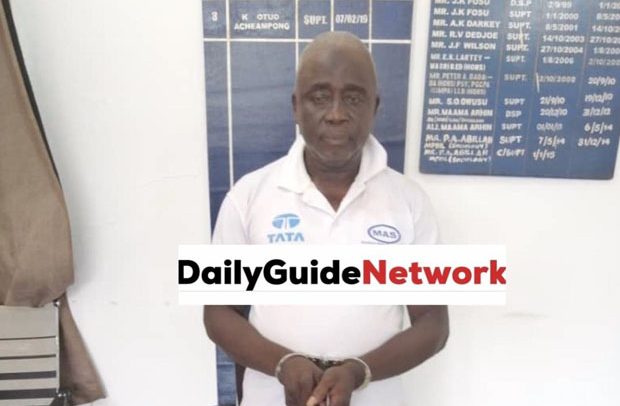 A 63-year-old man, Mahama Issahaku Gonja, is in the grips of the Northern Regional Police Command for allegedly defiling three girls and impregnating one of them, a 13-year-old at Shishagu in the Northern region.

The suspect is said to be a traditional guitarist with two wives and eight children.

Meanwhile, the 15-year-old girl’s family have withdrawn the case from the police station to settle it at home.

The uncle of the two of the victims aged 13,14 (name withheld) told DGN Online that the girls narrated to them that the three were passing by the suspects house when he called them to go and buy him soft drinks.

According to him, they said when they returned with the drinks he asked them to come inside his room with it which they obliged.

He indicated that immediately they entered, the suspect threatened them with a knife and forcibly had sex with the three girls.

The uncle noted that the suspect threatened to kill them if they revealed what happened to anybody.

He explained that after some months they realized that the 13-year-old girl started vomiting which they thought was malaria and sent her to a pharmacy for medical care and it was revealed that she was pregnant.

He said the family met with the suspects family and they accepted responsibility and promised to take care of the girl till she gives birth.

The uncle disclosed that the issue was reported to the police and a medical form was given to the family and the victim was sent to the hospital.

DSP Emmanuel Horlutu, the Northern Regional Coordinator of the Domestic Violence and Victim Support Unit (DOVVSU) confirmed to DGN Online that the case was reported and the suspect has been arrested and in police custody.

He, however, indicated that the police are investigating the case and arraigned the suspect for after investigations.

Rape and defilement cases has become a worry to residents in the region due to the number of cases being reported at the chiefs palaces and police station.

This month, a 25-year-old man was jailed 10 years for defiling a two-year-old girl in the region.

Residents applauded the judge for his swift judgement within four days of the case indicating that it will serve as a strong warning to persons who engage in such acts.

How My Wife Died From A Wrong Prescription At Ridge Hospital