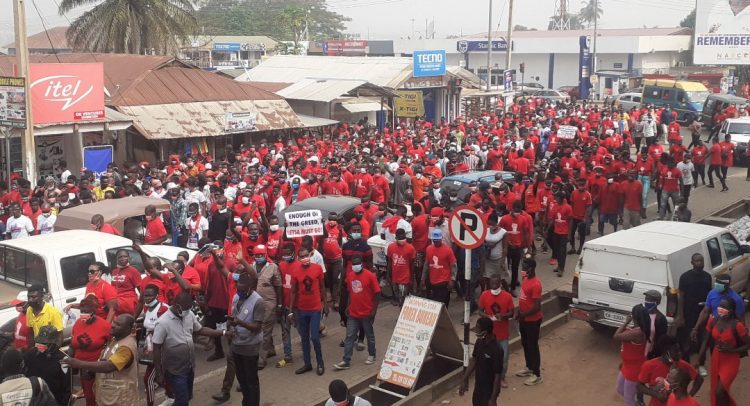 It appears the Volta Regional Minister Designate, Dr. Archibald Yaw Letsa may have a hard time holding the governing New Patriotic Party (NPP) in the region together should he be approved by parliament and subsequently sworn into office.

This came to light when the rank and file of the governing NPP in the Volta Region staged a mammoth demonstration against his re-appointment last Monday, January 25 2021.

The “Enough is Enough” demonstration organised by a group calling itself Volta NPP Grassroots for Justice drew thousands of party members from across the region to Ho, the regional capital. Residents have described the demonstration as the biggest in recent years.

Interestingly a good number of the constituency chairmen and their executives were actively involved in the demonstration which brought activities in the regional capital to a temporary halt.

For two hours; the demonstrators clad in red sang and wielded placards, danced and chanted war songs as they processed through the principal streets of Ho. Some of the placards they wielded had inscriptions like; One Man No Chop; Enough is Enough, Where are the Masloc Tricycles, Dr. Letsa?, Enough is greed Letsa Must Go, Where are the auction cars, Dr. Letsa?, How many Campaign Platforms Did you mount? Among others.

Addressing the crowd at the Regional Office of the party, the spokesperson of the group, Kingsley Horsu stressed that the rank and file of the party was appalled by the conduct of Dr. Letsa for the period he first served as Regional Minister.

According to him, in as much as they owed it a duty to support the party and the Akufo-Addo led government in its decision and programs, the party’s constitution also enjoins them to promote and defend the good name and interest of the party at all times.

To this end, the demonstration which is to register their outright disapproval and rejection of Dr. Letsa’s nomination should not be misconstrued as a fight against the President or the party, but fight to protect the sacred interest of the party and region at large.

Mr. Horsu noted that although they had no problem with Mr Letsa’s academic and professional credentials, his conduct as a political leader was abysmal to say the least.

They accused him of dispersing the party by employing divide and rule tactics; a situation which has put them in bondage and perpetual retrogression

He revealed that they have always known Dr. Letsa to be one who does not have the party at heart in terms seeking the interest of members apart from his.

However, they hoped that his appointment as Regional Minister in 2013 to 2016 would have seen some change. Unfortunately, he failed to redeem himself.

He alleged that the party is always in debt anytime His Excellency President Nana Addo Dankwa Akufo Addo visited the Volta region on his usual regional tour. To the extent that about Ghc60,000 is owed service providers due to Dr. Letsa’s posture in dealing with such matters. 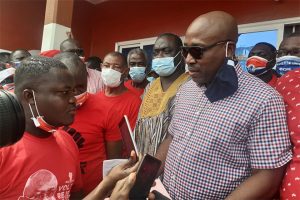 They also accused Dr. Letsa of not mounting any campaign platform apart from when the president visited the region and he had to play a role as the Regional Minister. He did not also join his own Constituency; Ho Central’s Campaign hence the abysmal performance of the party in his own hometown, Klefe where he voted.

They further alleged that NABCO personnel who were drawing allowance from the government were allegedly diverted to work in his private companies and Hotel.

Another accusation is that logistics like tricycles, sewing machines and hair dryers meant for campaigning for votes in the constituencies found their way into Dr. Letsa’s Shopping Mall, residence and Hotel.

They also berated the regional executives for not sending the sentiments of the party grassroots to the powers that be and President and hoped that they would do the right thing henceforth.

The Volta Regional Chairman of the Party, Makafui Woanyah who received the petition on behalf of the party commended the party members for being peaceful about their concerns. He assured that the executives will push their grievances to the appropriate quarters for redress. He was flanked by all the Regional Executives who called for calm.