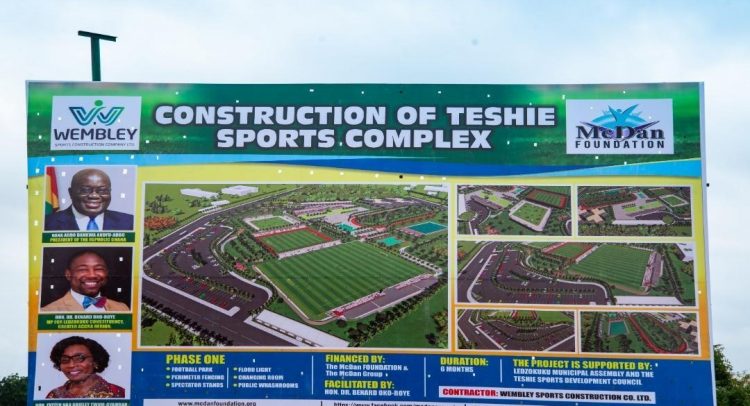 McDan Group, a Ghanaian transportation and logistics company is investing GHC30m to transform the grassless Teshie Star Park into a multi-purpose sports complex.

Acting Director of McDan Foundation Frank Oduro, on behalf of Dr Daniel Mckorley, Executive Chairman, McDan Group speaking at the sod cutting ceremony in Accra on Tuesday said the project was to develop talents, promote local tourism, create jobs and improve the fortunes of the local economy in the area.

He said the Member of Parliament for Ledzokuku Dr. Bernard Okoe-Boye, approach the Group to replicate the construction of the astroturf in La community to Teshie residents and the response was positive.

“Because we value the importance of sports development, we never hesitated to heed to the MP’s request to improve sports to a higher level and develop talents for the country”, he said.

He said the Foundation as part of its Corporate Social Responsibility, had constructed and renovated similar facilities in parts of the communities and would continue with the initiative to improve sports infrastructure in the country.

Dr. Okoe-Boye, commended McDan Group and other stakeholders for helping to ensure the start of the project, adding that premier league teams could use the facility as their home matches when completed.

He encouraged all residents to support the initiative, since it would benefit the community and serve as a social centre for programmes and generate revenue for the Assembly.

Municipal Chief Executive for Ledzokuku Evelyn Naa Adjeley Twum-Gyamrah lauded the McDan Group for the initiative, and indicated that the project was in line with the president’s vision to have decent and modern multipurpose sports facilities across the country for sports and talent development.

She said the project was historic and had high hopes that the likes of Black Stars players including Laryea Kingston who hail from the Teshie would emerge from the Teshie community again.

General Manager, Wembley Sports Construction Company Nana Antwi, said his outfit would immediately start the project and would engage the local people in the construction of the facility.
GNA