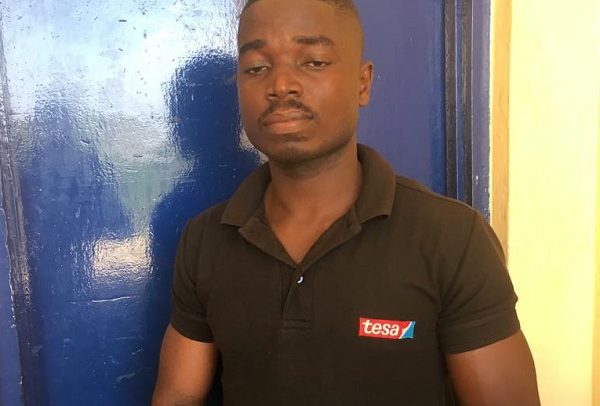 A 26 year old mechanic who faked his attack and robbery has landed himself in trouble for deceiving the police.

Benjamin Bonney reported to the Kpeshie Divisional Police Command that he had been attacked by armed robbers and his unregistered Toyota corolla vehicle stolen.

Police investigations discovered that the suspect faked his attack and had hidden the vehicle at a location and detained him for further interrogations.

Information gathered by the DAILY GUIDE at the Kpeshie Divisional Police Command indicated that Bonney was a mechanic who dealt in the sale of vehicles as well.

The report indicated that on November 15, 2019, a military friend, identified as Sergeant Bay Collins who lived at Burma Camp gave him his unregistered Toyota Corolla vehicle to sell.

The following day, around 8:55pm, Bonney rushed to the Nungua Police charge office to lodge a complaint that while on his way to buy food that fateful hour, around the Nungua Senior High School area; three armed men attacked him and snatched the vehicle.

The report indicated that upon receiving series of questions from investigators, it was discovered that the complainant had faked his attack and was detained for further investigations.

“Further investigations by the police into the case discovered that complainant had hidden the vehicle at a friend’s house at Nungua Cold store.

Apparently, the paper discovered, the complainant turned accused, had told the owner of the vehicle that he had been robbed of the car while driving the vehicle in town before reporting the matter to the police.

The Kpeshie Divisional Police Commander, Assistant Commissioner of Police, (ACP) Francis Tsidi, when contacted confirmed to DAILY GUIDE that police investigations later led to the discovery of the vehicle at the location where it was hidden.

He said Bonney was later arraigned, where he was convicted to a fine of 100 penalty units or in default spends four months prison term.

“We have realized that this is the new trend some criminals have adopted to outsmart the public and the police.”

He said such persons fake their own attack and after the case had been reported, they later go back to enjoy the booty, while their victims suffer.

He urged the public to beware of the new plan of suspected criminals and not fall victim to their ploy.