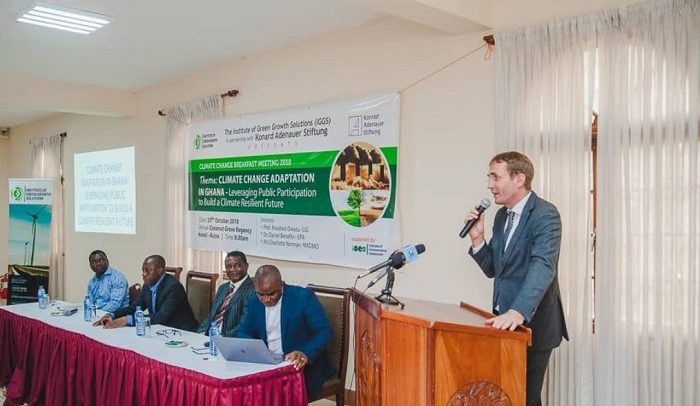 Burkhardt Hellemann speaking at the event

The Resident Country Representative of KAS, Burkhardt Hellemann, has observed that climate change coverage in the media has not been encouraging and has therefore urged the media to prioritize and publicize issues on the changing weather patterns.

He argued that though  climate change news are complicated and unexciting, they are nevertheless important issues and the media have to innovate ways and means to ensure  that the audience find the topics interesting.

He made the statement at a forum which was organized by Institute of Green Growth Solutions (IGGS), in partnership with Kornrad Adenauer Stiftung (KAS), sponsors of the programme. The forum which was themed ‘Climate Change Adaptation in Ghana’ was held at the Coconut Grove Regency Hotel on Thursday in Accra.

The forum also served as a dissemination of findings of a survey on: “Leveraging Public Participation to Build a Climate Resilient Future.”

Earlier, a Research Fellow at IGGS, Dr Edward Nunoo, specified that majority of the working class in Ghana earn their living from businesses that depend on natural resources while the nation derives majority of its export earnings on the utilization of nature.

According to Dr Nunoo, though Ghana earns a lot of foreign exchange from cocoa production, the enterprise is, unfortunately, still at the mercy of the weather.

“If the rains stop or the country experiences drought for a long time, as a result of climate change, it will affect our cocoa that is why we should be working towards adaption,” he suggested.

He indicated that mainstreaming climate change issues was an emerging approach that sought to integrate policies and measures to fuse climate change strategies into ongoing sectorial, development planning and decision making processes to ensure enduring sustainability and reduce vulnerability.

On his part, Climate Change Expert at the Environmental Protection Agency (EPA), Dr Daniel Benfor, said changes in weather patterns usually have a great impact on the country’s economic gains.

Describing the signs, effects and forecasting of climate variation as disturbing, he called for the need to broadly involve the public, through awareness creation, by linking the effects of weather changes on regular activities and include them in developing actionable adaptation measures.