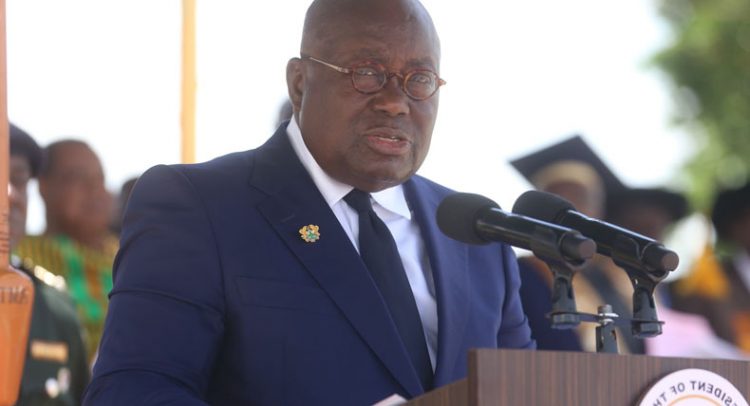 President Nana Akufo-Addo has assented to an amendment to the country’s mining laws that will see convicted illegal miners facing at least 15 years in prison.

Speaking at a meeting with the Council of State, Nana Akufo-Addo said this development was a marker of his determination to fight illegal mining.

“It is was brought to me for my assent so it is now law. Parliament has amended the mining law and heightened considerably the penalties for engaging in illegal mining. We are talking about minimum sentences of 15 years, maximum 25 years. We have also increased punishment for foreigners who intervene in this industry.”

Aside from the new minimum sentences, convictions for illegal mining could attract minimum fines of 150,000 penalty units.

The new law also criminalises any aiding and abetting of illegal mining activities as well as the use of other equipment for mining in water bodies.

The Minerals and Mining Act, 2015 (Act 900) and the Minerals Commission Act, 1993 (Act 450) were the main enactments setting out the guidelines for mining in Ghana.

Before the 2019 amendment, the maximum jail term for engaging in illegal mining was five years.

The government’s clampdown on the small-scale mining sector and illegal mining in 2017 saw hundreds of arrests.

This was part of the bid to reduce environmental degradation and sanitise the small-scale mining sector.

These actions by the state were accompanied by calls for harsher sentences for offenders to serve as a deterrent.

But during the clampdown on the sector, the government exhibited some leniency by introducing alternative livelihood programmes in 18 districts severely affected by illegal mining.

The programme engaged 500 small-scale miners and was coordinated by the Inter-Ministerial Committee on Illegal Mining and implemented by the Ministry of Local Government and Rural Development.