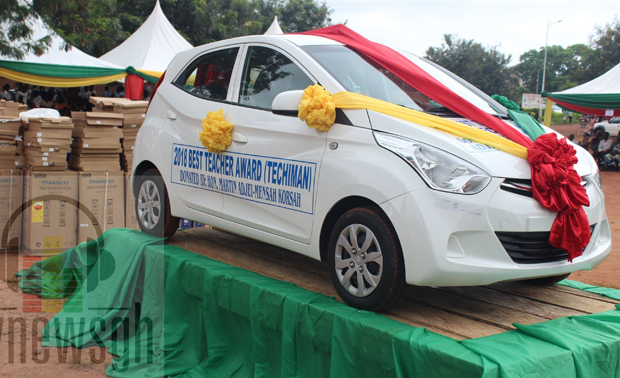 DEPUTY MINISTER for Regional Reorganization and Development, Martin Adjei Mensah-Korsah, has awarded the 2018 Best Teacher of the Techiman Municipality in the Brong Ahafo Region with a brand new Hyundai EON salon car.

The car, DAILY GUIDE was informed, has a five-year warranty and comprehensive insurance spanning the same period. It was aimed at encouraging teachers in the area to give off their best.

The donation made on October 5, 2018, marked the revival of the best teacher award scheme in the area; a scheme which has been suspended by the Education Directorate of the Ghana Education Service (GES) for the past nine years, citing unavailability of funds.

Commenting on the scheme in a statement, the deputy minister who hails from Techiman indicated that an invitation was extended to him to support the award scheme.

He recounted that “last year, I participated in the Farmers’ Day celebration at Nsuta, Techiman.”

After that event, “I received a request from a retired teacher to institute an awards scheme to reward teachers in Techiman for their selfless contributions in educating our people.”

He added that the same request had been made earlier to him by the Municipal Education Directorate of Techiman, then headed by Very Rev. Philip Obeng Adjei.

“Upon consultations with Education stakeholders within the Techiman enclave, I acceded to the request and pledged publicly, on New Year’s Day to initiate an awards scheme that would reward deserving teachers beginning 2018.”

He disclosed that for the long term, “I am securing a sustainable arrangement that guarantees this event’s funding, at least for the next ten years.”

The committee, the deputy minister said, was tasked to organise the event including determining the nature of the awards to be presented to the awardees.

The committee had received from the Ghana Education Service a list of 192 teachers, who since 2009 had been selected through the G.E.S.’ own internal procedures to be rewarded for their outstanding contributions to the education of students in both Techiman North District and Techiman Municipality, but till date, the event had not been observed .

“For the avoidance of discrimination, we would recognise Teachers who have been selected as winners of various categories of awards in the past but have not been rewarded.  It would be climaxed with award winners for 2018, he added in the statement.