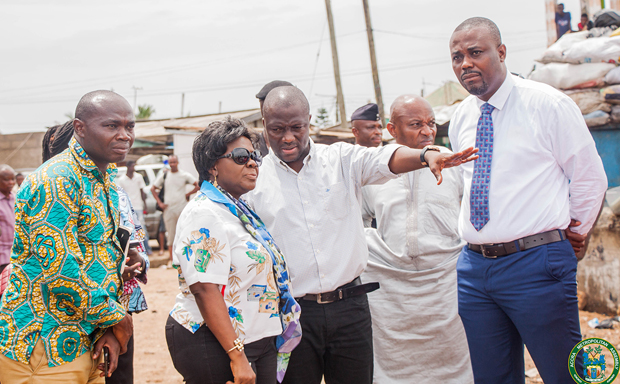 Cecilia Dapaah being briefed by Mohammed Adjei Sowah, as others look on

The Minister for Sanitation, Cecilia Dapaah, has directed the newly-created Municipal and District Assemblies (MDAs) to ensure that capped landfill sites in their jurisdiction remain closed and prevent the sprouting of illegal dump sites.

She also inspected the Osu Alata drain yesterday to acquaint herself with the challenges and progress made in achieving a clean Accra.

Ms Dapaah said waste bins and transfer stations would be provided for city dwellers as a temporary holding place for waste.

“There would be evacuation of waste at the transfer stations and treatment and recycling of waste as long term solutions to making Accra the cleanest city in Africa.

She stressed that the reclamation illegal dump sites in the city would involve the mining of plastics and conversion of non-plastic refuse into manure, adding that it would create employment for the youth and generate revenue for the country.

“One of the solutions is to mine plastics because it’s huge money, and we are doing this for the wellbeing of Ghanaians. We can engage the youth who are willing to work to come in and lift the plastics so that we don’t have any heavy trucks moving within as quickly as practicable,” she added.

She revealed that “we have seen the beautiful work done by the youth, they were sorting the paper, plastics, the glass and it’s beautiful but we need to support them. I will go and work there one of these days to feel how they work.”

She reiterated that the President’s vision to make Accra the cleanest city in West Africa by 2020 was achievable and that her office was working around the clock to make it a reality.

The minister urged all city dwellers to come on board to achieve the goal.

Mr. Sowah stressed that the Assembly was making significant progress in achieving the ‘Clean Accra Agenda.’

He added that the city authorities would focus on solid waste, liquid waste, drain maintenance, maintenance of cemeteries, plant breeding and landscaping and pest control to make Accra clean.

He indicated that the ‘Accra Sanitary Sewer and Storm Water Drainage Alleviation Project (ASDAP), popularly referred to as the ‘Conti Project,’ was initiated to improve the drainage system in the city but was hampered by challenges, which the Ministry of Works and Housing was working on.

“Partially, some of the projects are going to be undertaken under the World Bank Project, which is the Greater Accra Resilient Integrated Project (GARIP), which will dredge the ‘Odaw’ River, as well as construct some transfer stations between the city center, and then have rotation so that when it rains, it does not flow straight into the river. We will place holding bays that will release the water into the Odaw,” he indicated.

He observed that Accra was at the receiving end of all waste generated from the up streams, hence the need to intensify efforts to curb the problem, adding that “we need to step up our work, because when it rains at dawn, you can see that plastic waste has been washed into the drains from the upstream Akuapem areas and then we will receive it.”

Touching on how to tackle the construction of buildings in waterways, Mr. Adjei Sowah revealed that the Assembly has embarked on several demolition exercises to remove structures on waterways to curb the perennial flooding in the city.