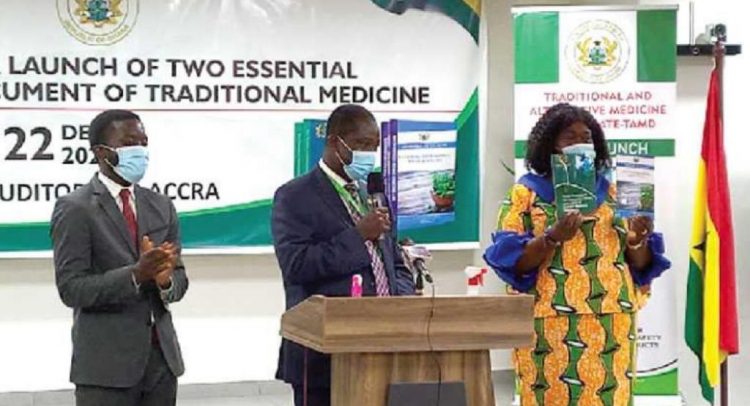 Mr. Kwabena Oku-Afari (middle), Chief Director, Ministry of Health, being supported by Dr. Mrs. Anastasia Yirenkyi, Director in charge of the Traditional and Alternative Medicines Directorate of the MoH, to launch the two documents.

The Ministry of Health (MoH) through the Traditional and Alternative Medicines Directorate has launched two documents on traditional medicine in the country.

The documents, “Recommended Herbal Medicine List” and the “Basic Procedure for Assessing Efficacy and Safety of Herbal Medicine Products” are to
enhance the process of integrating traditional medicine into the national healthcare delivery system.

Minister of Health, Kwaku Agyeman-Manu, in a speech read on his behalf said traditional medicine is an important contributor to the health care delivery system adding that mainstreaming the sub-sector into the healthcare system would improve outcomes.

“Over the years, we have seen the evolution and reinvention of traditional medicine in its various forms, play a truly significant role in the delivery of healthcare in the country,” he said.

He thus noted that the launch of the two documents formed part of the government’s commitment to the growth of traditional medicine practice in the country.

Mr. Agyeman-Manu said a further demonstration of the importance the government attached to traditional medicine was the inclusion of the two documents into the 2022 budget.

He said in the planning for the integration, institutionalisation, professionalisation, and rational use of herbal medicines, it became necessary to select from herbal medicines registered with the Foods and Drugs Authority (FDA) and give market authorisation to compose the medicine list recommended for use in the management of common health conditions and the strengthening of the therapeutic domain where better medicines were required.

“This is not by accident, it is the result of a deliberate policy to redefine and encourage the enhancement of capacities and capabilities of various players in the sector,” he said.

The sector minister said the government would continue to work with all stakeholders to ensure that traditional medicine in the country continued to improve to the level of attaining global recognition.

“The standardisation, efficacy, and safety of herbal medicinal products have become issues of major concern for policymakers and the general population regarding their consumption and absolute reliance on it as far as people’s health is concerned.

“Although we are dealing with natural products, which in most instances are taken as food, like ‘prekese’, ‘Dawa Dawa’, ginger among many other plant-based products, we need to understand that when we intend to use them in very large quantities, then we must make sure that the product goes through series of tests to establish quality, safety, and efficacy,” the minister said.

Mr. Agyeman-Manu said the development of the Basic Procedure for Assessing Efficacy and Safety of Herbal Medicine Products policy was also developed to, among others, respond positively to the health needs of the population with unique products that were accessible, safe, efficacious, affordable, and compatible with modern science and technology.

Director in charge of the Traditional and Alternative Medicines Directorate, Dr. Mrs. Anastasia Yirenkyi, said the sector had made great strides over the years and the launch of the two policy documents would serve as a booster to ushering the traditional medicine sector into its next phase of practice in the country.

“The potential contribution of herbal medicine to the national healthcare system, particularly, primary healthcare delivery cannot be underestimated, especially in this era of the Covid-19 pandemic,” she said.

Dr. Mrs. Yirenkyi said to ensure rational dispensing of traditional medicines in health facilities, there was the need to prepare the recommended herbal medicine list policy document to serve as a guideline.

She said the documents would also facilitate further research into traditional medicines to contribute to the delivery of universal health coverage.

The President of the Ghana Federation of Traditional Medicines Practitioners Association, William Odum Eduful, expressed gratitude to all stakeholders who contributed to the development of the two documents, particularly, the Health Minister, Mr. Agyeman-Manu.

He also agreed that the documents would enhance the use of traditional medicine for better health outcomes.

Mr. Eduful, however, appealed to the minister to facilitate the inclusion of the list onto the National Health Insurance Scheme package for easy access by the population and establish a fund to support the research and development of traditional medicine in the country.