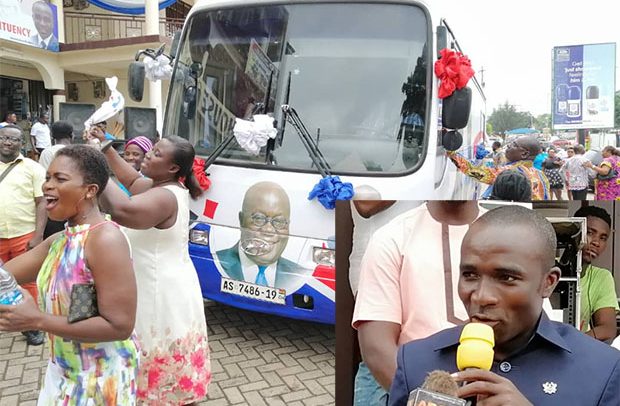 The Member of Parliament (MP) for Nhyiaeso Constituency in the Ashanti Region, Kennedy Kankam, has donated a 40-seater bus to the constituency office of the New Patriotic Party (NPP).

According to him, the donation formed part of his commitment to resource the party at the constituency level towards election 2020 and beyond.

The MP indicated that the bus would serve as a means of transportation for members of the NPP in the Nhyiaeso Constituency as well as the party’s executives.

He added that the gesture was among numerous things being done to provide opportunities for the constituents.

He said he would also lead an Nhyiaeso business delegation to South Korea on September 28, 2019 for the members of the Nhyiaeso Business Chamber of Commerce to explore partnerships for their businesses.

The donation also coincided with the dedication of a new constituency office for the party.

The MP rented the Office for the party.

Mr. Kankam announced that he had also secured a land for the construction of an office building for the party in the constituency, and called for support from party faithfuls to help him deal with other unfinished business.

The event was attended by Director of Operation at the Presidency, Laud Commey, MP for Kwadaso, Dr Samiu Nuamah, board member of the Ghana Cocoa Board, Nana Adwoa Dokua, and Nhyiaeso Constituency Chairman, George Kofi Adjei.