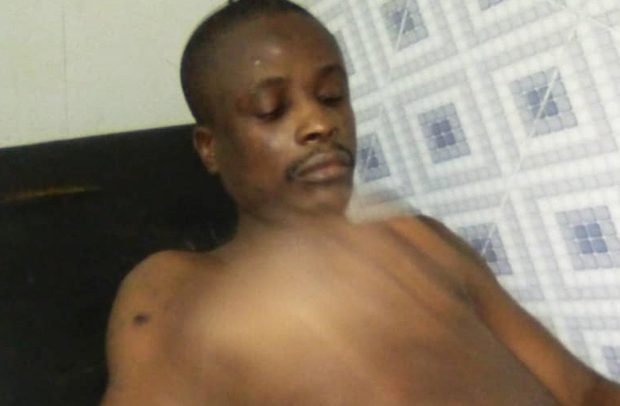 A murder suspect who is facing trail at the Sogakofe High Court has attempted killing himself by cutting off his manhood while in temporal custody at the Abor Police station.

But for the timely intervention of the Police officers at the station, the suspect, 35-year-old Thomas Agbezuke, would have bled to death last Sunday (may 31, 2020) evening after cutting his manhood with a sharp object.

A leaked situational report (sitrep) seen by DGN Online indicates that the incident happened at about 11:00pm that fateful night when G/Cpl Emmanuel Kyei was going round to undertake routine checks on inmates in the cell.

Although initial search in the cell to find the object used by Thomas in committing the act proved futile, the Public Affairs Officer of the Volta Police Command, Cpl. Prince Dogbatse confirmed that the suspect revealed later that “he managed the break a piece of the tile floor of the cell to cut himself while the other inmates were asleep.”

Cpl Dogbatse explained that Thomas, a native of Afife in the Ketu North District is originally being held at the Ho Central Prison after he attempted to murder his own relative, one Francis Agbezuke as far back as May 17, 2017, thus three years ago.

Thomas had stabbed Francis who is believed to be his cousin in the stomach such that his intestines were falling out.

Thomas’ own father and another relative handed him over to the Police.

The case has seen been going through committal processes at the Sogakofe High Court while he was held in Prison custody at the Ho Central Prisons.

To this end he was last put before the court on May 22, 2020 where his case was adjourned to July 1, 2020 when trail is expected to commence.

However due to the reviewed protocols at the Ho central prison, Thomas could not be taken back into custody until he had been tested for COVID-19 and results proven negative.

To this end he was sent to the Abor Police station where the Covid-19 task force was contacted to take his samples for subsequent testing.

It is this temporal arrangement to ensure the safety of prison inmates and containing of Covid-19 in the Volta region that seem to have afforded Thomas the opportunity to attempt to take his own life by using a piece of broken tile floor to cut his manhood.

Cpl Dogbatse says the suspect is responding to treatment at the Sacred Heart Hospital at Abor.

That notwithstanding, preliminary investigation is pointing to attempted suicide; a charge which will also be level against him aside his substantive case of attempted murder.

He noted that despite this isolated incident Police cells in the region remain safe for inmates and all Police stations have been directed to heighten their alertness while other arrangements to ensure safety and welfare of persons in their custody.