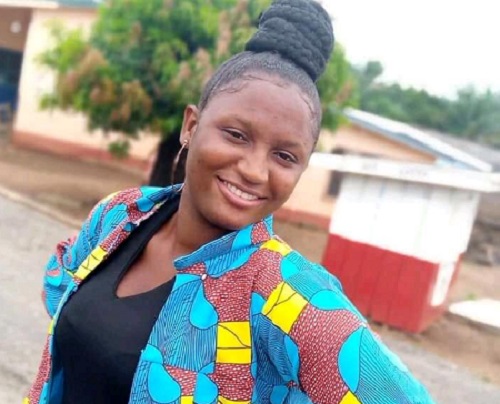 Hundreds mourners thronged the Kpetoe cemetery in the Agotime-Ziope District of the Volta region to bid farewell to 25-year-old Harriet Kafui Hiati who was allegedly murdered by her boyfriend, Anthony Dordorye, popularly known as Ball Jay.

The sympathizers who were mostly age-mates and friends of the couple had traveled from Ho, the regional capital to join the family of the deceased to bury Harriet in a burial ritual known as “Dzogbeku”.

It is a kind of burial done for persons who are deemed to have died an unnatural death or under bizarre circumstances. Unlike the normal funeral rites which are characterized by a durbar at the home of the deceased, this one has everything done at the cemetery and usually very solemn, brief, and private.

However, the numbers that were at the cemetery last Wednesday, April 21, 2021, were so huge that covid-19 safety protocols could not be adhered to. Be that as it may, the family expressed gratitude to the hundreds that had come out to join them.

Although the family declined to comment on the incident, an uncle of Harriet, Bright Hiati told journalists that although the family is distraught about the death of their daughter they believe that should the law take its course and justice is served, they will get some closure, no matter how little that may be.

Coincidentally, Anthony who had been admitted at the Ho Teaching Hospital for attempting to kill himself after he allegedly killed his girlfriend was discharged the same day of the burial.

He was quickly arraigned before the Ho Magistrate Court and charged with murder. The court remanded him into Police custody to reappear on May 5, 2021.

The Public Affairs Officer of the Volta Regional Police Command, Sergeant Prince Dogbatse who confirmed the arrest explained that Anthony was provisionally charged with murder to allow for the Police to complete its investigations.

He said, arraigning the footballer before the Magistrate court is part of some preliminary processes to fulfill in order to move the case to trial.

He revealed that the Police released the body of the deceased to the family after a post mortem was performed. However, they are yet to receive results.

He said the results and other evidence in the possession of the Police will help to build a good case so that justice will be served to all parties.

In the early hours of Tuesday, March 23, 2021, residents of the Freedom Hotel area in Ho woke up to the unfortunate news of Harriet Kafui Hiati and Anthony Dordorye.

They found Harriet lying dead in a pool of blood with a deep cut on his throat while Anthony had a deep cut in his stomach and neck in an attempted suicide.

Harriet’s body was sent to the morgue of the Ho teaching Hospital. Anthony, who was admitted at the same survived after a three-hour surgery. He has been under police guard while recovering in the hospital over the last four weeks. He was discharged last Wednesday.