NAM 1 Is Back! Grilled By CID 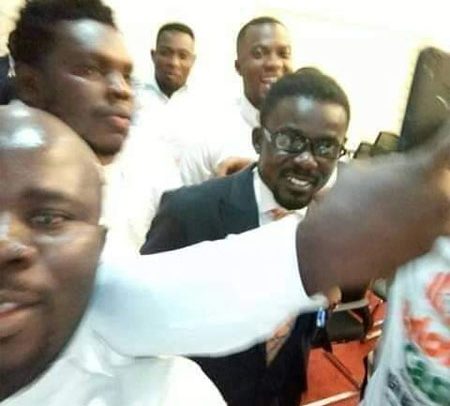 The woes of Chief Executive Officer  of the embattled gold dealership firm, Menzgold Ghana Limited, do not appear to go away anytime soon.

Nana Appiah Mensah, aka NAM1, arrived in the country yesterday around 11 am from Dubia, where he has been in jail since December last year. Immediately he landed, he was whisked away to the Police Headquarters to be interrogated.

The Ghana Police Service issued a statement later, confirming his arrest and said he was in the custody of Interpol Ghana to assist in investigation.

“The Chief Executive Officer of Menzgold, Mr. Nana Appiah Mensah, is in the custody of the CID/HQ. Following the Interpol alert issued for the accused, NAM1 was handed over to Interpol Ghana by Interpol Dubai today, for the CID to continue with  the investigation started in 2018,” the unsigned terse statement, which was posted online, said.

According to the source, NAM1 is facing provisional charges including collecting deposits without licence, money laundering and defrauding by false pretences.

Kwame Boafo Akuffo, lead counsel for NAM1, told journalists at the Police Headquarters that his client had gone through formalities at the CID office and was satisfied with progress made.

“The Ghana police have been extremely professional, responsible, and respectful in this matter,” he said.

Sources say NAM1 is expected to be brought before a judge today.

Another source says there are 21 different official complaints of fraud lodged against him at the CID Headquarters regarding the activities of Menzgold.

“Initially, 21 people made official complaints against him for defrauding them. It is most likely others will or may add up to the case. Besides, he has to assist the police in the investigation and it was dangerous to release him straight away,” a source said.

At about 2pm yesterday some friends and associates of NAM1 were at the CID Headquarters to see him but they were not allowed access to him.

When news spread on social media that NAM1 was arriving, scores of people thronged the Kotoka International Airport to catch a glimpse of the Menzgold boss but they were disappointed when the law enforcement agents swerved all of them.

Last week, an Appeals Court in the Emirati country reportedly upheld the acquittal and discharge verdict of the embattled Menzgold boss, an indication that the numerous customers whose funds have been locked up at the gold collectible firm might be getting something back very soon.

A Dubai-based gold firm – Horizon Diamonds Royal – which was reported to be indebted to NAM1 to the tune of $39 million had filed the appeal against a high court ruling in Dubai.

NAM1 was arrested in Dubai in December 2018 in connection with an alleged fraudulent gold deal.

A statement issued by management of Menzgold Ghana Limited yesterday said, “The appeal processes initiated by Horizon Diamonds Royal DMCC against the Executive Officer of our company, Nana Appiah Mensah, following his acquittal and discharge in the Dubai Court of first instance has been fully tried and completed.”

“Among others, the Dubai Superior (Appeal) Court upheld the acquittal and discharge verdict by the first instance court, consequently dismissing both the criminal and civil frivolous claims made by the appellant before them against our Chief Executive Officer,” it said.

NAM1’s trouble in Dubai started after he was introduced to officials of an Emirati-based company – Horizon Royal Diamond – for the supply of gold until some delays angered the Dubai company managed by a Lebanese.

Manager of Horizon Royal Diamond, whose name was given simply as Daniel and based in Dubai, was said to have instructed his representative, one Zacca, who is believed to be an Angolan, to find out what was causing the delays.

However, upon his arrival in Ghana, Zacca visited NAM1 at his office and there he met a Nigerian named Ayodeleor Ade and a Ghanaian called Charles – both were believed to be the business partners of the Menzgold boss.

After Zacca’s meeting with NAM1, he reportedly had discussions with the Nigerian and Ghanaian, who promised to supply gold from Sierra Leone at a cheaper rate.

Zacca informed Daniel in Dubai about the new arrangement, and they reached an agreement with the Nigerian and Ghanaian without the knowledge of NAM1.

The two failed to supply the gold from Sierra Leone as promised, which led Horizon Royal Diamond to lose $51 million in the process.

After the loss, officials of the Dubai-based company reportedly went back to NAM1 to ‘revive’ their business and even apologized to the Menzgold boss who allegedly accepted them back.

The source said the Dubai company became indebted to Menzgold to the tune of about $31 million.

Again, the source indicated that after their failed attempt in getting gold from Sierra Leone, Horizon Royal Diamond officials proposed to NAM1 for them to enter into a joint venture (JV) arrangement for the acquisition of a gold mine in the Ashanti Region called Oware.

NAM1 is said to have agreed to the proposal and made a commitment to inject $2 million to commence the acquisition process while Horizon Royal Diamond also pledged to inject $100 million into the operations of the mine.

The agreement, however, failed to materialize but supply from Menzgold continued, as NAM1 reportedly sourced gold across the country.

DAILY GUIDE investigations in February revealed that there were a total of 4,998 customers of Menzgold and not the estimated 46,000 as published earlier in the media.