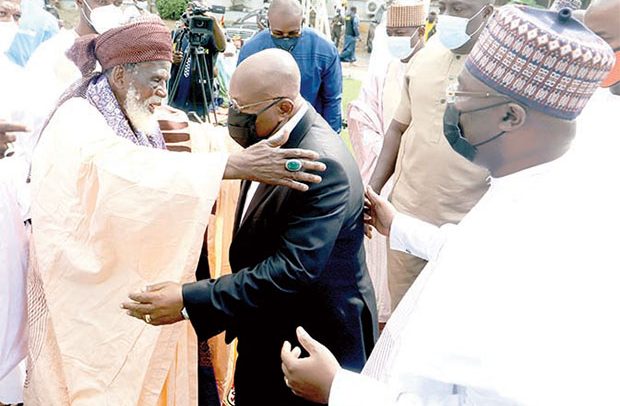 President Akufo-Addo being embraced by Sheikh Osman Nuhu Sharubutu while Vice President Dr. Bawumia looks on at the 2021 Eid-ul-Fitr in Accra.

President Akufo-Addo has called for an amicable settlement of the simmering religious disagreement between Christians and Muslims in the country.

It follows a decision by the management of the Wesley Girls’ Senior High School in the Central Region not to allow Muslim students in the school to observe the 30-day period of fasting on the grounds of health, a decision which triggered a heated exchange between members of the two faiths in the media.

Speaking at an event to mark the celebration of this year’s Eid-ul-Fitr at the premises of the Ghana Broadcasting Corporation (GBC), he stressed the need for care to be taken not to turn the country’s boarding and senior high schools into ideological and religious battlegrounds.

That, he said, was because it will ultimately affect the development process of the children of the country.

Meanwhile, he said boarding schools in the country have traditionally served as training grounds in learning about each other, about tolerance, and losing the fear of the unknown; reason every effort must be made to protect the enviable blessing of religious co-existence in Ghana.

He, however, insisted “these schools must necessarily have rules and regulations that enable them to function.”

“Throughout the years, schools have by and large managed to find a reasonably balanced atmosphere to enable our young people to flourish and this has served us well. The schools have evolved and adopted their practices to suit the times and I will urge that we do not turn them into places to fight ideological and religious battles,” the President added.

The President noted that “in the specific incident of one of our greatest schools, Wesley Girls’ High School, which has given rise to the recent discourse on religion, the authorities, that is Ministry of Education under its new Minister, Dr. Yaw Adutwum, the leaders of the Christian and Muslim communities and the leadership of the school are engaged in solemn discussions about the way forward and I am very hopeful that a satisfactory solution will be found for one and all.”

He reiterated his government’s commitment to Muslims and the Zongo community, adding that he remains resolute and will not relent in the development equation between Zongo communities and other communities in the country.

He, therefore, noted that the Zongo Development Fund set up by government will continue to function perfectly under his direct watch and that of Vice President Bawumia.

To that end, he urged residents of the Zongo communities to as it were “ignore the sad falsehoods being propagated that we have given up on the Zongo development agenda,” insisting “the reality on the ground shows clearly that we are on track.”

On his part, the National Chief Imam, Sheikh Osmanu Nuhu Sharubutu, in a message to the country read on his behalf by Sheikh Arimiyao Shaibu, urged the Muslim community in Ghana to endeavour to live peacefully with other religious groupings in the country.

He also prayed for divine wisdom for the President and the Vice President as they continue to work for the prosperity of the country.