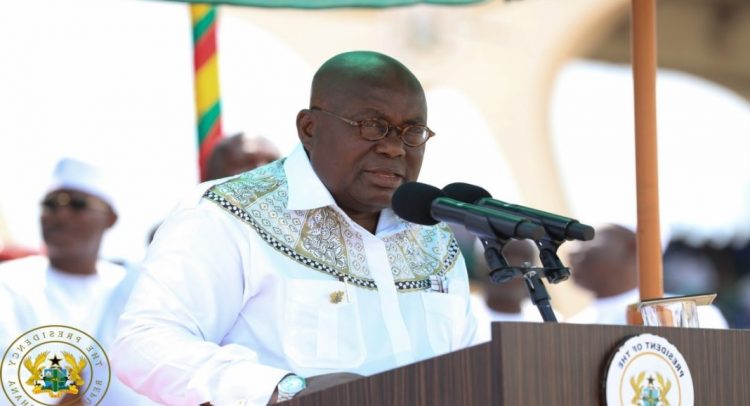 According to the Chief whose area spans a majority of the Jasikan District, the President’s achievements within a record period of two years of being in office,” was unprecedented.

He therefore described him in the Akan Dialect as OseadeƐyor” to wit “A promise keeper or one who keeps his word.”

He stressed that indeed, the people of Jasikan, are “not ignorant about the numerous achievements” of the government of President Akufo-Addo in all aspects of the national development.

Nana Akpanja V gave the accolades last Tuesday May 14, 2019, when the President commenced a two-day working visit to the Oti Region, as part of his 6-day tour of the Oti, North East and Savannah Regions.

The Chief was elated that the agricultural and services sectors had recorded over 100 percent growth since the President took over.

All these and the many social interventions like Free Senior High School, he suggested had declined interest rate, created a better climate for business and growth and given the youth a future.

It is no wonder “Ghana’s economic performance is on record as one of the best in Africa currently,” the Chief averred.

Oti Region
Commending the President for the creation of the Oti region, Nana Akpanja described President Akufo-Addo and his government for being the political midwives that oversaw the safe and successful delivery of the Oti Region.

He said the people of Oti, including their ancestors who begun the struggle in 1945 cannot thank the President enough “for making this half-a-century old dream of our people, including our ancestors, come true in our time.

Buem, Biakoye, Sall, Jasikan, will forever be grateful to Nana Addo Dankwa Akufo-Addo and his government for demonstrating boldness and commitment to principle, ” the Chief averred.