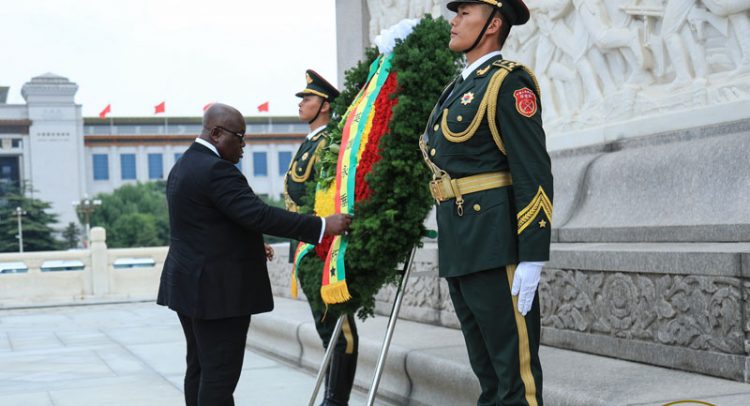 President Akufo-Addo has reiterated his commitment to tackling illegal mining also known as ‘galamsey,’ to save the environment.

The President, who is currently in China on a state visit, stated categorically that he would not allow ‘galamsey’ operators to destroy the country’s environment.

He said that illegal miners are rapidly destroying the environment, especially water bodies and farmlands in the rural areas.

President Akufo-Addo, who took his fight against ‘galamsey’ to China, said his administration would not abandon the campaign to effectively tackle the menace.

He urged the Chinese government, led by President Xi Jinping, to intervene in the ‘galamsey’ fight to help restore purity to Ghana’s water bodies.

According to him, it is a known fact that some Chinese nationals that are peacefully domiciling in Ghana are also actively involved in illegal mining.

“We want your help fully so that we can remove this impediment to the strong cooperation between Ghana and China,” President Akufo-Addo said during a meeting with President Xi Jinping in Beijing on Saturday.

According to him, Ghana and China must find a lasting solution to the canker to avert the harmful effects.

President Jinping, on his part, said his government would support Ghana in the fight against ‘galamsey’ in order to save the environment.

“My government will cooperate with Ghana to tackle the problem,” Mr Jinping told President Akufo-Addo and his high-powered government delegation.

According to the Chinese leader, his administration fully accepts the enforcement of Ghana’s laws with regards to fight against ‘galamsey.’

He would join other African leaders during the opening of the 2018 Forum on China-Africa Cooperation (FOCAC) today.