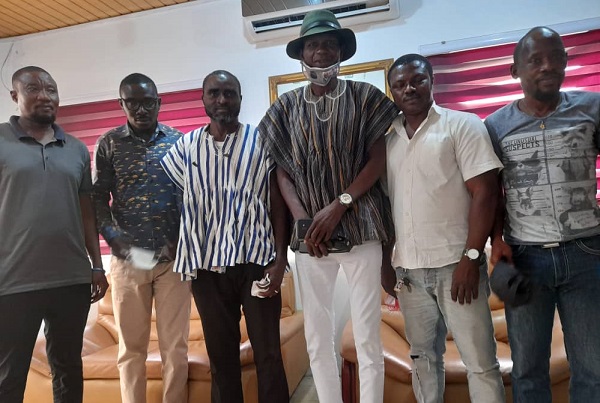 The National Coordinator of the ‘Nana One Touch’ group, yesterday, stormed the office of the DAILY GUIDE to express gratitude to President Akufo-Addo for, in his own words, “reposing confidence in the good work of the Chief Of Staff Madam FremaOsei-Opare and considering her as worthy of a trustful lieutenant.”

Nana Yaw Gyapong was accompanied by executives of the grouping which saw action during the elections which swept President Akufo-Addo to power recently and the one before it.

Madam FremaOsei-Opare, according to him, is one official whose contribution towards the success of the Akufo-Addo administration cannot be overlooked.

We are excited that this has not been lost on the President who has gone ahead to repose confidence in her even before releasing the list of his appointees to Parliament.

“It is our position that she would do even more during the second and last tenure of President Akufo-Addoat the helm,” he said, adding “she has already commenced work in earnest.”

A Chief Of Staff under our political circumstances must be one experienced in governance and steeped in the affairs of the ruling party, something which Madam FremaOsei-Opare has, he said.

The grouping, which he said is engaged in various activities which would enhance the electoral leverage of the NPP, would turn its attention to the 2024 campaign. It is the wish of the grouping, he said, that Vice President MahamuduBawumia succeeds President Akufo-Addo considering his pedigree in issues about fiscal management and governance.