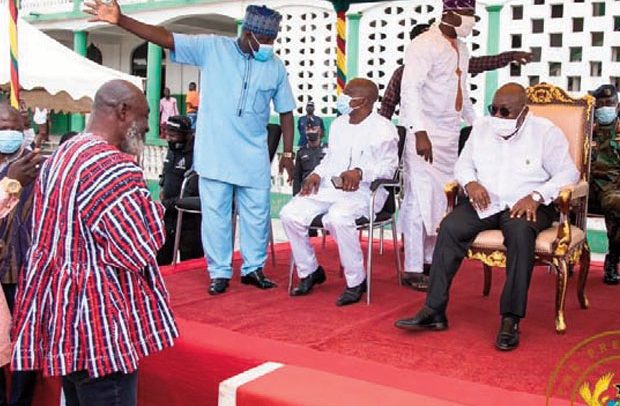 President Akufo-Addo at the ceremony

The occasion was the Eid-ul-Adha ceremony, also known as the ceremony of sacrifice, one of the pillars of Islam.

Led by the Ashanti Regional Chief Imam, Sheikh Abdul Mumin Haroun, the Muslims prayed fervently for Allah’s continual protection and blessings for the country and its people, especially against Covid-19.

Besides, they prayed to Allah to intervene so as to ensure that the upcoming general election, which is about four months away, would be totally peaceful.

The Ashanti Regional Chief Imam and the congregation, in addition, prayed for sound health, heavenly wisdom and God’s protection for President Akufo-Addo and his entire family and appointees.

President Akufo-Addo, in his remarks, admonished Muslims to let the spirit of sacrifice and loyalty, of which the Eid-ul-Adha stands for, to reflect in their lives.

He said it was the spirit of sacrifice, loyalty and total obedience that inspired Prophet Abraham to accept Allah’s command to sacrifice his son, Ishmael, urging Muslims to emulate that positive example.

Significantly, social distancing and other health protocols, such as the wearing of face masks and the washing of hands with soap and water to avert the spread of Covid-19, were adhered to by the worshippers.

The President would be spending the weekend in Kumasi. He is expected to meet the New Patriotic Party Ashanti Regional and Constituency executives on Saturday.