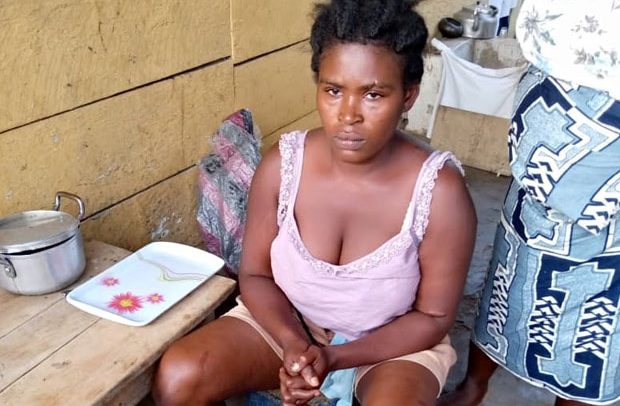 Details are emerging about how a woman allegedly killed her two children at Manhean, a suburb of Tema Newtown in the Greater Accra Region.

Twenty-eight-year-old Abigail Agbubla, a trader, is alleged to have given a poisonous substance to the children and that killed them.

Information available to DAILY GUIDE from the family indicates that the woman appears to be mentally deranged.

Meanwhile, the suspect, in a voice conversation with some neighbours, a copy of which is in the possession of DAILY GUIDE, revealed the mother told another person that the children looked unwell and was advised to send them to hospital.

Consequently, the suspect claimed she went to a health facility and they gave her what looked like glucose to be given to the children.

The sickness did not go away so she claimed she rushed to her church at Kpone and returned with a bottle of water to bath the children on Wednesday night.

She said when the children ceased breathing, she rushed to a native doctor in the area to narrate the issue to her.

The native doctor raised the alarm upon hearing the story which attracted neighbours to the place and the suspect was marched to her room where they found the children motionless.

The Tema Regional Police Command was alerted about the matter at about 5:30 p.m. on Thursday, and crime scene experts and investigators were dispatched to the scene where they also found the bodies of a boy and a girl aged two and eight months respectively in a wooden structure.

“On inspection, no marks of assault were found on the bodies. However, their mouths and nostrils were foamy. Police retrieved a bottle containing some liquid which will be sent to the police forensic laboratory for examination. The mother of the children, Abigail Agbubla, was arrested and detained to assist in investigation,” the acting Public Affairs Manageress of the Tema Police, Chief Inspector Stella Dede Dzakpasu, narrated.