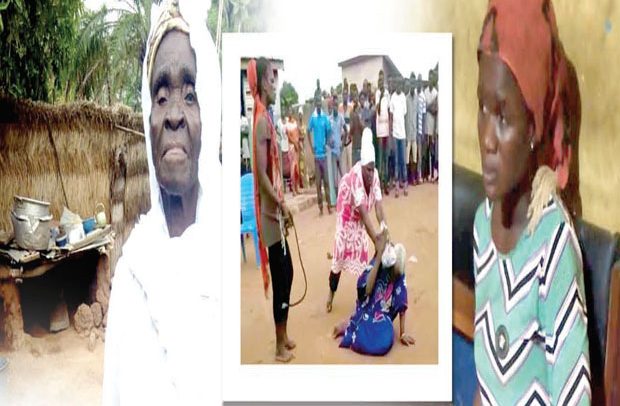 A key suspect in the lynching of Akua Denteh, a 90-year-old woman, over allegation of witchcraft at Kafaba in the Gonja East Municipality of the Savannah Region, has been arrested by the police after she tried to escape from the area.

Latifah Bumaye, believed to be an associate of the ringleader, Hajia Filipina, was picked up at Kejewu Bator, a fishing community under the Abrumase Police within the Salaga Division at East Gonja, while going to Yeji.

According to police sources, they heard about the hideout of the suspect and dispatched detectives to Kejewu Bator where she was picked up and escorted back to the Salaga Divisional Command.

DAILY GUIDE understands that she is being processed to be sent to the Regional Police Command in Damongo for further action.

The suspect is believed to be one of the two ladies seen in the viral video lynching the 90-year-old woman because they claimed she was a witch.

She is believed to be the woman in the video menacingly whipping the old lady with a long whip which she brandished. Meanwhile, the chief suspect, Filipina, is yet to be apprehended.

Five people, who are believed to have participated in the lynching which has since sparked national outrage, have been remanded in police custody by a district court at Bole.

The suspects – Haruna Aness, 34; Issaka Tanko, 35; Shaibu Murtala, 29; Sulemana Ali, 35; and Issaka Sachebu, 32, have been charged with conspiracy and murder.

The Chief of Kafaba, Seidu Yahaya, under whose jurisdiction the incident occurred, has also been granted police inquiry bail.