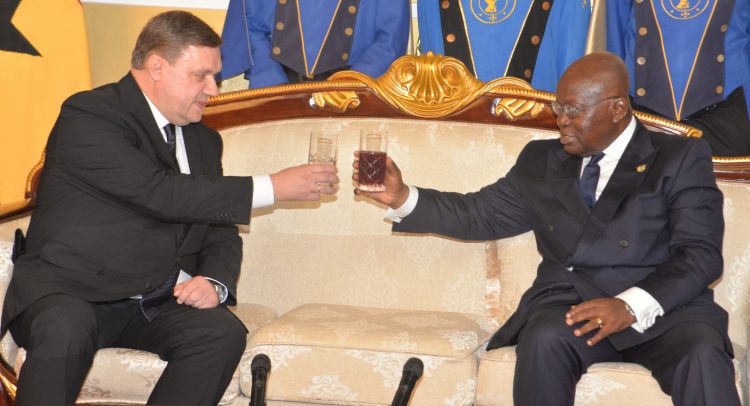 President Akufo-Addo proposing a toast to Jyrki Juhani, Finland Ambassador to Ghana at the Jubilee House in Accra.

First on the list was the newly-assigned Morrocan Ambassador to Ghana, Imaani Ouaadil, who said she was looking forward to strengthening the economic relations that exist between Ghana and her country.

She said she would spare no effort in enhancing the bond of cooperation existing between the two governments and raise the Ghana-Morocco bilateral relations to a new high.

Ambassador Natasha Halfhuid of Suriname, in her address, observed that like Ghana, Suriname has huge reserves of rainforest with an abundance of freshwater conducive for faming and eco-tourism. Suriname, she added, is also rich in gold mines, bauxite with huge deposits of oil and gas.

“The abundance of all these resources presents to both Ghana and Surinarme a new chapter, as it relates to trade, investment and partnerships, providing us with immediate opportunities for strengthening our economic ties,” Ambassador Halfhuid said.

President Akufo-Addo also stated that it would make economic sense for Ghana to liaise with Belarus to enhance the exploitation of her natural resources by tapping into the technological know- how of Belarus.

On his part, the Ambassador of the Eastern European State of Belarus, Bril Vyacheslav, indicated that Ghana is not only known as a country with huge economic potentials but is also considered to be the hub of the West African market.

To this end, Ambassador Vyacheslav said, “Belarus is highly motivated to intensify the development of trade and economic relations with the Republic of Ghana.”

The Finnish Ambassador, Jyrki Juhani, touted the educational system in his country ‒ which, according to him, has seen a tremendous improvement ‒ one of the best in Europe.

He expressed his country’s readiness to share with Ghana all the policies that have made her educational system a success.

President Akufo-Addo, in response, said government through the Education Ministry would be ready to send a delegation to Finland to gather first-hand information of the Finnish education system in order to apply same to improve Ghana’s educational sector.

The last to present his credential was the Gambian High Commissioner to Ghana, Amadu Taal, who commended President Akufo-Addo for “the clear vision you have defined for the development of your country. We have no doubt that this developmental strategy is beginning to yield positive results in various sectors of the economy.”

In welcoming all five envoys to Ghana, President Akufo-Addo wished them a successful tour of duty to Ghana.

He stressed the preparedness of officials of the Presidency and the Ministry of Foreign Affairs & Regional Integration to assist them in order to make their tour of duty a successful one.