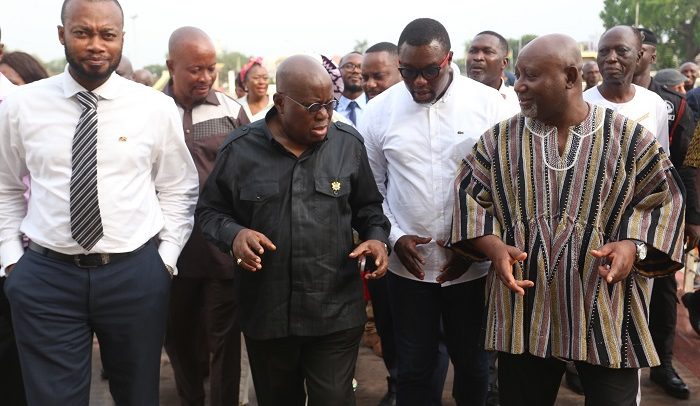 PRESIDENT NANA Addo Dankwa Akufo-Addo has called on farmers to maximise their potential to reap the full benefits of the industry.

He said farmers in neighbouring Ivory Coast were making more money from agriculture than their Ghanaian counterparts hence the need for stakeholders in the agriculture sector to do more to take advantage of government initiatives.

“You constitute one of the most important parts of the Ghanaian economy; next door, our neighbour, friend and competitor gains on the average US$16 billion dollars from its agriculture, eight times more than ours,” he told members of the National Farmers and Fishermen Award Winners Association (NFFAWAG) when they called him at the Jubilee House, yesterday.

The President said “you are the only people who can fill the gap and bring us from that two billion to the 16 billion.”

He considered the meeting with the farmers an important one. “Your concerns are very much my concerns and that is why it is important for me to have this opportunity to talk to you on a regular basis,” he said.

The President therefore noted that “the yearly visit is really not enough. We should be talking at least twice a year so that in real time, we can address some of the problems,” adding, “God willing if the four more for Nana works, we will have a new timetable and a schedule for our meetings.”

On his part, National Chairman of the NFFAWAG, Davies Korboe, showed appreciation to the President for keeping faith with farmers and engaging them to move agriculture to a higher level.

He listed some challenges that members of NFFAWAG were facing, including how to improve the mechanization of agriculture, the shortfall in financing the agric sector, marketing, pricing and price stability of their produce, quality standards as well as pest control challenges. Other challenges he enumerated included access to loans by rice value chain actors, lack of storage facilities in rice growing communities and poultry farming challenges, among others.

Korboe urged the President and his administration to give such concerns immediate attention.

To that, President Akufo-Addo noted, “the Agribusiness community has a great potential for the rapid development of our country and anybody who is serious about governance in Ghana has to pay a great deal of attention to your concerns so that we can all grow together.”