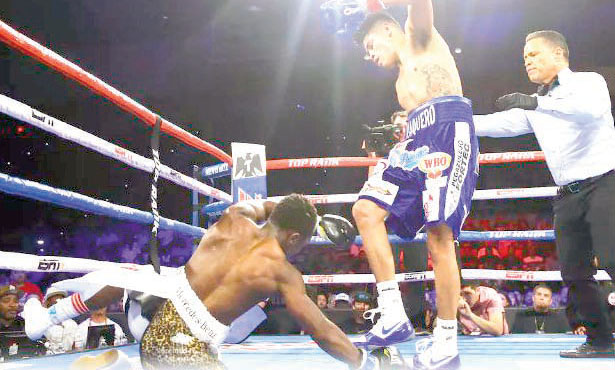 Emanuel Navarrete defeated Isaac Dogboe by TKO in round 12 to retain his WBO junior featherweight world title‒ the same belt he won in his first fight against Dogboe in December‒ at the Tucson Convention Center, Ariz, on Saturday.

Navarrete had little difficulty in registering the first defence of his super bantamweight title, scoring a one-sided 12th round stoppage over the man from whom he claimed it in a repeat 12-round win on Saturday evening.

Dogboe was down twice in the contest, including a right hand shot which ended the fight at 2:02 of the 12th and final round.

Navarrete (27-1, 22KOs) sought to pick up exactly where he left off in his title-winning effort five months ago, using every bit of his massive height and reach advantages in launching power shots from long range.

Dogboe knew to anticipate the tactic, fighting behind a high guard and shooting counter right hands although he was significantly outworked in the round.

Add the cut to Dogboe’s right eye and there was a lot for the Mexican to use to his advantage.

Finally, in the 12th round, Dogboe’s corner decided it was enough and threw in the towel to end the bout.

“I thank God for this bout and I thank Team Navarette for the chance. I give hats off to him for a great job and I can only say well done to him. I will move up to 126-pound division. I will be more comfortable in that weight class,” Dogboe stated.