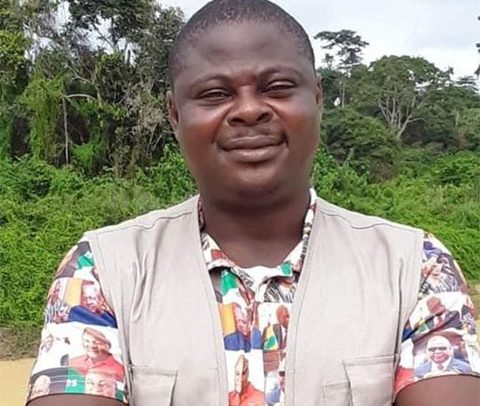 The National Democratic Congress (NDC) Central Regional Communications Director, Emmanuel Kwesi Dawood, who was being sought after by the police over allegation that he had sexual intercourse with his biological daughter, has been arrested.

Dawood, in the company of two lawyers and three other people, went to Cape Coast DOVVSU Regional Office and was interrogated for a long time.

DAILY GUIDE sources say the victim and his mother were also invited by the police as part of the investigation.

The police also confirmed that Kwesi Dawood had come to them in Cape Coast and they were interrogating him.

The NDC has already suspended Kwesi Dawood from his position pending the investigation.

Initially, Kwesi Dawood said the woman (Mavis Ayite), who is ‘pushing’ the girl (victim) to make the allegation, was a TESCON member at the University of Education, Winneba (UEW), and that it was an NPP agenda to discredit him.

Later on Adom FM on Monday, the same Kwesi Dawood said that it was his own NDC party elements who were behind the agenda he had accused the NPP of instigating, and said the NDC elements were doing that because the party’s internal election was drawing closer.

Kwesi Dawood hit the headlines when a woman who claims he impregnated her and abandoned her, alleged that the NDC man has been sleeping with the teenage daughter they have together.

According to the lady, Kwesi Dawood has allegedly been having sexual intercourse with his biological daughter since 2019 when the victim was 15 years, and in the course of the beastly act, the girl became pregnant.

He then allegedly got his friend to administer an injection to terminate the pregnancy last year, and according to the victim, she bled for more than two weeks.

The girl has claimed that Kwesi Dawood beat her up when he got to know she had informed her mother about the father’s incestuous act, an incident that ended at the Swedru Divisional Police Command.

In the ensuing heat, the NDC Regional Secretary, Kojo Quansah, confirmed on Monday that Kwesi Dawood has been suspended by the opposition party.

“When we look at the position Kwesi Dawood is holding as Regional Communications Officer, and for him to be embroiled in such a case, we obviously, are sad,” he said.

“In party politics, all the executives are one body so anyone of us who is involved in a criminal case automatically will have negative effect on the whole party. It is Kwesi Dawood who is being alleged to have been involved in incest but technically, his conduct is affecting all of us.”

Mr. Quansah said “we haven’t told him to go and have sex with his daughter but once it is alleged to have happened we shall use Article 48 of our party’s constitution to take drastic decision against Kwesi Dawood.”

“It has worried all of us, especially the administrator of the region. How can I stand somewhere and say that we do not know anything about what Kwesi Dawood has done?” he queried, adding “we heard it as an allegation and the victim has spoken, the mother of the girl has spoken and the police who are investigating the case have also spoken, so we cannot do any cover-up.”

“We want to put on record that Kwesi Dawood has been suspended as Regional Communications Director of the NDC. As a major political party, we do not condone such things. Even if our leader is found to have breached the law, we can take action against him.”

Kwesi Dawood has denied vehemently that he committed incest, and said his accusers are doing that to tarnish his reputation.

“Mavis Ayite is not my wife and has never been my girlfriend. The girl is not my biological child. I am ready to submit to any paternity test anywhere. There is no occasion that I have slept with the child. I am not a dog!”

“The lady is NPP TESCON at UEW so they are using her to destroy Dawood. She has been contracted to do it,” after which the same Kwesi Dawood said NDC internal elections are getting closer and he was aware some NDC elements are using the lady to destroy him ahead of the contest.