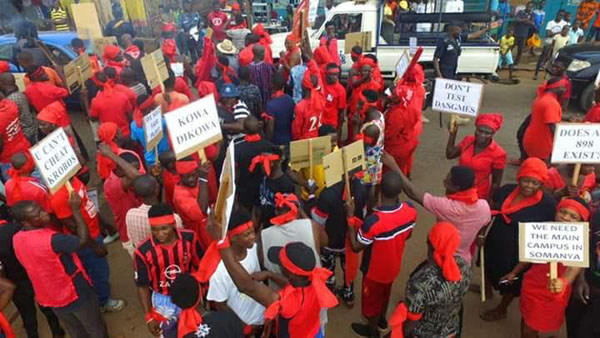 The planned demonstration being championed by a group calling itself ‘Coalition for Social Justice (CSJ)’ has suffered a setback.

The group, largely made up of members of the opposition National Democratic Congress (NDC), is protesting against what it has termed as hardship in the country.

Members of a Coalition of Economic Association that the CSJ announced were going to participate in the march christened “Kum Yen Preko” have said they are withdrawing from the action.

The coalition said the decision to withdraw was agreed upon by sub-associations including Vehicle and Asset Dealers Association of Ghana (VADAG), True Driver’s Union, Chamber of Petroleum Consumers (COPEC), Ghana Committed Driver’s Association, National Concerned Spare Parts Dealers of Ghana and Jacob Osei Yeboah, an Independent Presidential Candidate during the 2012 elections who were also planning to join the CSJ demonstration.

Members of VADAG, for instance, had reportedly said they were going to demonstrate against the luxury vehicle tax.

Executives of the coalition attributed the decision to drop the planned demonstration to the outcome of ‘a careful consideration’ of the protest.

The statement signed by VADAG President, Eric Kwaku Boateng, said, “As an association, we are open to further deliberations with the government on the best way(s) of making Ghana business friendly and engaging. High nuisance taxes will not only cause damage to business growth but also stall innovation and job creation. This luxury vehicle tax, if not abolished, could cause such damage.”

“To this end, VADAG entreats ALL members to proceed on normal work activities as deliberations with the government still continue as we disassociate ourselves from ANY protest on July 9 regarding the said luxury vehicle tax,” the statement said.

According to VADAG, they had resorted to seeking the intervention of stakeholders including former heads of state, diplomatic missions and civil society bodies to bring to bear upon government to drop the tax on luxury vehicles.

In the aftermath of the petitions, government has promised to review the tax ahead of the mid-year budget review.

However, Finance Minister Ken Ofori Atta’s word that the tax would be reviewed did not appear to please the VADAG who said, “We still insist the tax MUST be ABOLISHED and NOT reviewed.”

The “Kum Yen Preko” being led by CSJ was until the rescission by the associations slated to be held on July 9 to protest against what organizers said are difficult economic conditions.

Nana Says No To MPs Chamber; It’s Not On Our Radar