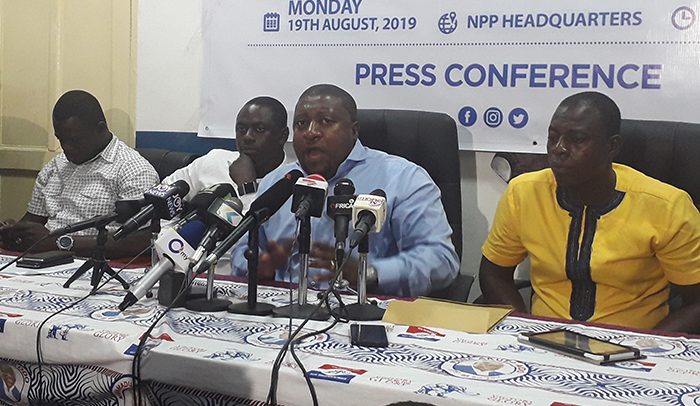 The governing New Patriotic Party (NPP) has condemned the NDC for a ‘campaign of hate and division’ after it accused President Akufo-Addo of stocking his government with his family and friends.

National Youth Organiser Nana Boakye insisted the appointments of family and relatives into government were made on the basis of competence.

“We are not sure about appointing enemies,” he said at a press conference to respond to the NDC which has released a list of 51 names of persons it claims are relatives and cronies in the Akufo-Addo government.

Calling the numbers “a classic and unprecedented” case of nepotism, the opposition party said the President, Nana Akufo-Addo has broken his promise not to run a family and friends government.

The NDC, therefore, called for the passage of an anti-nepotism bill.

In reply, the NPP has pointed fingers at the NDC for starting nepotism.

Nana Boakye referred to a comment by NDC leader Samuel Ofosu Ampofo made in August 2013 that he is a strong believer of family and friends.

The NPP National Youth Organiser pointed out that under the Mahama while in power handed his brother Ibrahim Mahama 80% of the country’s known bauxite deposits.

“We can also come out with a tall list of their relations” he threatened before dismissing such move.

“Yes, there is such a tall list but we think it is too cheap and unproductive”, he said.

The NPP also challenged the authenticity of the list, pointing out that at least 33 names “have no real family ties” to the President.

He called the allegations of nepotism “frivolous and unsubstantiated” stressing “it should not matter” the family ties an appointee may have.

“Are they not competent?” he said and challenged the NDC to prove the unsuitability of persons it named in their list.

He said some of the appointees had lucrative private-sector jobs but left them to sacrifice for their country.

The NPP said instead of sowing seeds of ethnocentrism, the NDC should be providing policy alternatives to the Ghanaian people.

He called the NDC press conference an empty waste of time.