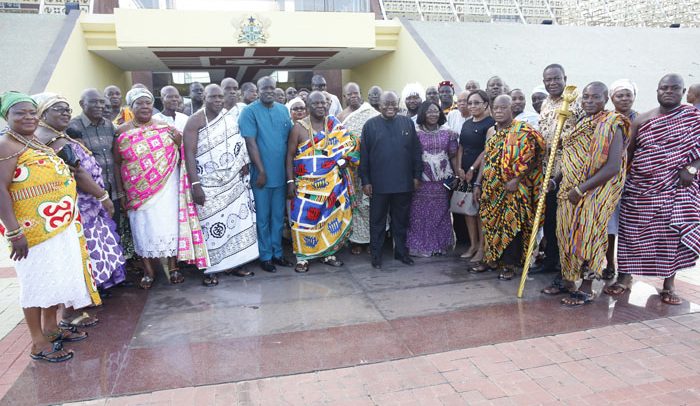 President Akufo-Addo in a group photograph with the members of the Tema Traditional Council after the meeting.

President Akufo-Addo has announced that a new hospital will be built for the people of Tema Manhean in the Greater Accra Region by the Ghana National Petroleum Authority (GNPC).

The President made the disclosure when the chiefs and elders of Tema called on him at the Jubilee House on Tuesday.

The delegation was accompanied by the Member of Parliament (MP) for Tema East, Nii Kwartei Titus Glover, who doubles as Deputy Minister for Transport, as well as Chief Executive of the Tema Metropolitan Assembly (TMA), Felix Nii Anan-La.

E.O Adjetey, Spokesman of the Tema Mantse, Nii Adjei Kraku II, appealed to the President to construct a hospital for the people of Manhean.

They said that Manhean has a large population which is being served by a small clinic.

“The people struggle on a daily basis to get to the Tema General Hospital, which is far away in order to access healthcare.

Before the spokesperson could conclude his speech, the President interjected and announced plans to construct a new hospital at Manhean.

Titus Glover, on his part, said, “Recently, I made an application to the Chief of Staff and she promised to also put in a word; he (GNPC boss) has assured us that after the approval in Parliament of their work plan, he is going to fund the project for us.”

He, therefore, appealed to President Akufo-Addo to also intervene on behalf of the chiefs and people of Manhean.

During the meeting, the president was surprised when the chiefs endorsed the government’s decision to place a temporary ban on fishing activities considering the opposition it has received from certain quarters.

“You came here to say that you are satisfied with what is being done and since you are one of the most important fishing communities in the country, that support is important for us,” the noted.

The President said “if we continue that path, one day we will wake up and find out we have no country; our lands would have been devastated, our waters bodies would be ruined and our fishing stock too will be non-existent.”

He also agreed to dredge the Chemu and Sakumo lagoons to meet the needs of the chiefs and elders.