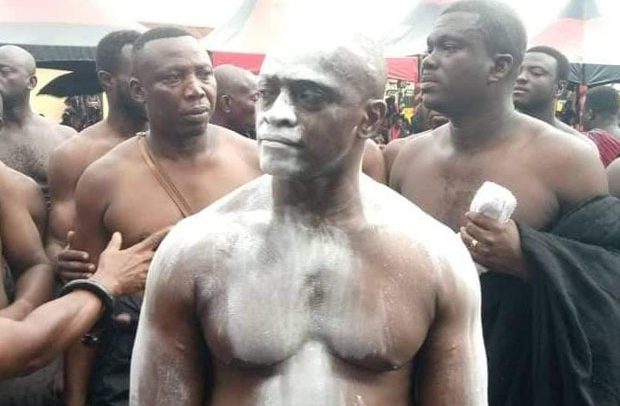 He is to replace the late Dasebree Prof. Emeritus Oti Boateng II, who died last year and buried this year.

As the customs and traditions demand, a new Chief has to be enstooled after the demise of the old chief and sit in the state for the final funeral rites to take place.

He is to be confined for 40 days after which he will take a stool name and swear allegiance to the state and the subchiefs to their new king. 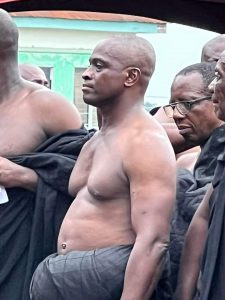 He was paraded before the Ashanti-Juaben Omanhene, Nana Otuo Sereboe, at the forecourt of the Yiadom-Hwedie Palace where he was officially outdoored to the king markers and sub-chiefs of the area.

He is the eighth born of the mother’s eleven children and has his primary school education at Madonna International School In Koforidua where he sat for and passed the common entrance examination and gained admission to St. Peters Secondary School in Nkwantia for his Secondary Education.

He showed such brilliance that he was one of the tops
students from Form One through to Form Five.

In 1989, he sat for and passed the Ordinary Level Exams with distinction.

He subsequently gained admission to the New Juaben Secondary School, Koforidua for his Sixth Form Course between 1989 to 1991.

He successfully passed the Advanced Level Examination in 1991.

Immediately after completing his A-Level Course, Odehyie Gyamfi traveled to Germany and obtained to the prestigious Block House College in Hamburg, Germany to pursue a course in Hotel Management in 1992.

He excelled in the course such that immediately upon completion he was offered employment as the Food and Beverage Manager at the prestigious Elyse Hotel (Block House) Hamburg, Germany.

He occupied this position until 2011 and during that period he was also assigned to Block House Restaurant in Berlin as a Food and Beverage Manager.

After working for close to sixteen years, Odehyie Gyamfi decided to pursue more academic excellence and this led him to pursue professional certification in Logistic and Building Services.

In 2019, Odehyie Kwadwo Yeboah decided to broaden his scope of business and ventured into farming and together with a group of friends established a poultry
farm in Ghana known as P89 in Winneba which has grown to become one of the largest poultry farms in Ghana.

He is married to Akosua Asiedua and has 7 children.