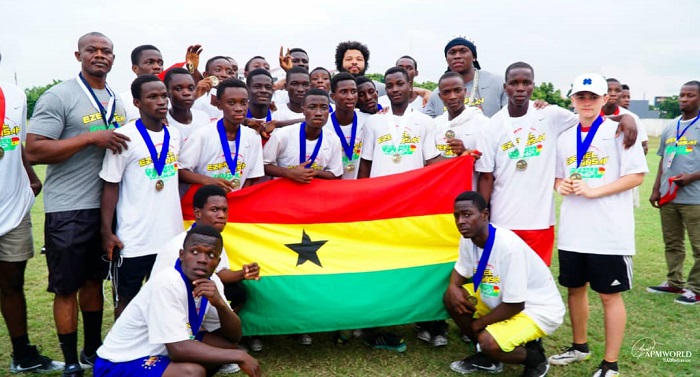 FLASHBACK: Ziggy (in a scarf) with participants and scouts at last year’s camp.

The camp, which seeks to discover and nurture talents, will see hundreds of senior high school students from all over the country participate in the game.

Participants will be taken through a number of techniques and skills in playing American football.

According to the organisers, the purpose of hosting the event annually is to promote healthy living, physical education, teamwork and how one can work towards one’s goal.

The former Detroit Lions Pro Bowl pass rusher, who joined the Seattle Seahawks on a one-year contract, is confident this year’s football camp will be greater than the previous years.

“This is one thing that I have really been passionate about. Growing up I never had anybody coming down [to Ghana] to do a football camp for me. But it’s something I learnt in the States; it has been great so far. I am looking forward to making it even bigger and better than previous years,” Ziggy said.

Over the years, the defensive end player has given back to society and continues to reach out more to deprived people through the Ezekiel Ansah Foundation, a non-profit organisation that strongly believes that with the right support and opportunity, they can steer youth on the right path and help them realise that they are, in fact, the answer to their own success.

To participate in the third Ezekiel Ansah football camp, register at www.eafghana.org.

Ezekiel Nana Ansah is a Ghanaian who played American football for the Detroit Lions and is currently signed to play for the Seattle Seahawks of the National Football League (NFL).

He is the youngest of five children. Edward Richmond Ansah, his father, worked for a petroleum company and Elizabeth, his mother, is a nurse.