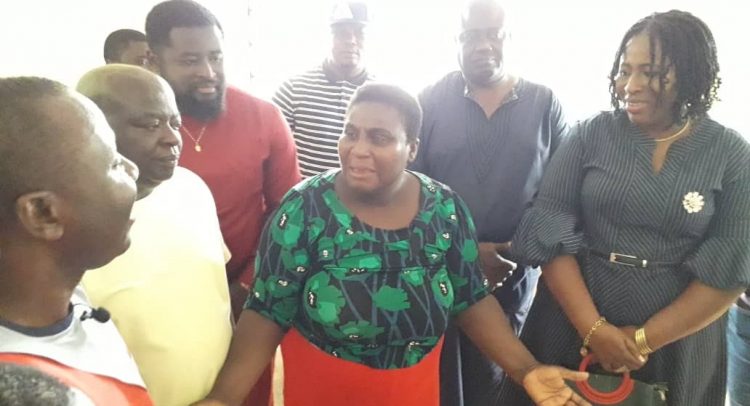 The woman in utter surprise at the house presentation ceremony.

A grandmother of newly born twins, Ekua Attah, could not hold back her tears on Thursday when a non-governmental organization (NGO), Crime Check Foundation (CCF), gave her a two-bedroom house at Bentum in the Awutu Senya East of the Central Region.

The timely intervention saved the woman in her fifties, who was a petty trader, from returning to her kiosk home at Shukura, a suburb of Accra, with her four months old grandchildren who lost their mother during child birth at the Korle Bu Teaching Hospital in Accra.

Her troubles of buying medications and settling morgue and hospital debts compelled an anaesthesiologist at the hospital, Dr. Carol Klorkor Collison, to contact CCF to help improve the condition of the grandmother who was also a widow. 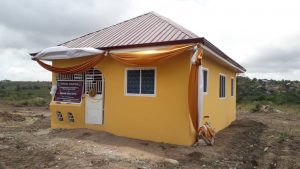 This come barely a week after Vice-President Dr. Mahmudu Bawumia made a similar gesture to an 80-year-old leper in Motori in the Wa West District of the Upper West Region, who was abandoned and left in a solitary dilapidated mud house.

Narrating how the foundation came to the rescue of the woman, the founder of CCF, Ibrahim Kwarteng, said he received a call from Dr. Collison who presented the plight of the grandmother to him.

According to him, even though he had not met the medical doctor before, he was touched by the story of the grandmother, and the foundation decided to mobilize funds through donation to help the woman pay the hospital bills and temporarily rent an accommodation for her.

While on this, Ibrahim said they had their eyes on a permanent solution, and that an initial amount of GH₵85,000 was raised and they contacted Agyare Estates to help secure land for the construction of a housing facility.

He indicated that the real estate also supported by offering to put up the house for Madam Attah at no cost as part of its corporate social responsibility.

Mr. Kwarteng expressed gratitude to all donors for their support and urged operators of NGOs to be sincere in their dealings in order to rid the perception that they are in the business of funds embezzlement intended for charity projects.

“We don’t do that. It’s an obligation between us and our God. You are duty bound to use the money for the intended purpose,” he said.

Madam Attah expressed her profound gratitude to all Ghanaians for coming to her rescue and that of her grandchildren, and described the house donation as the biggest change in her life.

According to her, she had never dreamed of owning a house in her lifetime and the gesture had brought broad smiles on her face.