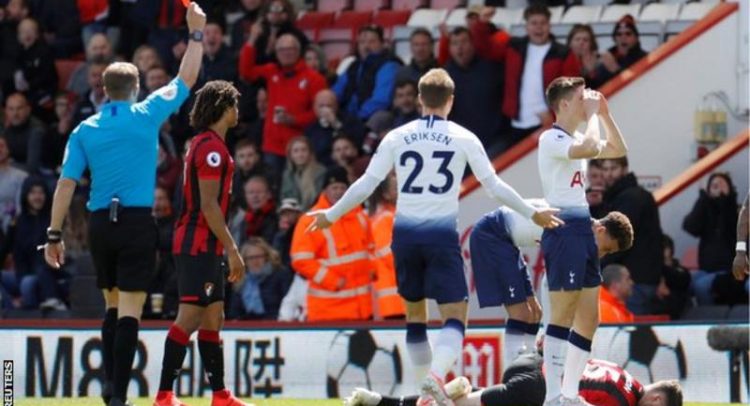 Tottenham had two players sent off as they missed the chance to guarantee Champions League football next season after Nathan Ake scored an injury-time winner for Bournemouth.

It was far from ideal preparation for Mauricio Pochettino’s side, who face Ajax in the Champions League semi-final second leg on Wednesday in Amsterdam, having lost the first leg 1-0.

Son Heung-min was dismissed for pushing Jefferson Lerma at the end of a frantic first half, in which Eric Dier was lucky not to have been sent off and Bournemouth could conceivably have had two penalties.

Then, just over two minutes after coming on at half-time, Juan Foyth was also shown a straight red card as he slid studs-up into Jack Simpson.

Spurs have now won just once in their past four league games and stay third on 70 points, four points clear of fifth-placed Arsenal, who have two games remaining.

Champions League qualification is still in Tottenham’s hands, and they need to beat Everton in their final league game on 12 May to make sure of a top-four spot.

Relive the action from Vitality Stadium
“It is very painful to play with two players less than the opponent,” Pochettino said.

“We need to move on. We cannot change the decisions. We have ahead two finals against Ajax and Everton. It is in our hands. If it does not happen we will be proud because nobody expected Tottenham to be in the position they are today.

Bournemouth gave a senior debut to 19-year-old Irish goalkeeper Mark Travers and he made five saves in the first half to keep Spurs at bay, but was a spectator in the second half.

Despite their numerical advantage, the Cherries were unable to capitalise until Ake popped up to score in the 91st minute.