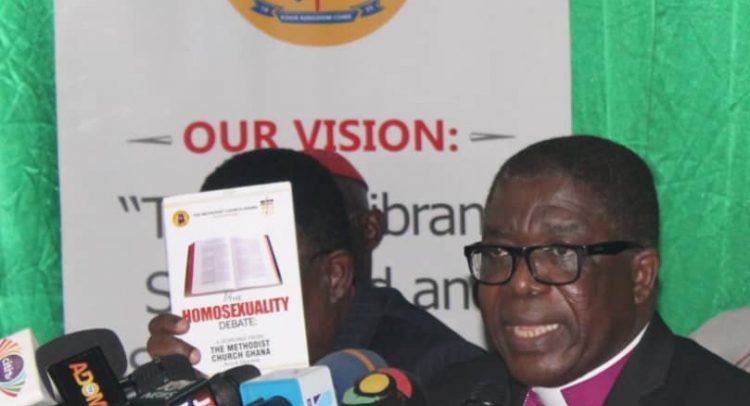 Methodist Church Presiding Bishop, Most Reverend Dr. Paul K. Boafo, displaying a book on the response from the church on homosexuality during the press conference.

The Methodist Church, Ghana, has kicked against same-sex marriage in the church, saying such relationships are neither supported by Biblical teaching nor can the Bible’s position be revised to support it.

The church believes that it is impossible for anyone to opt for such lifestyle and be called a Christian per the teachings of the Bible.

Addressing a press conference to set the records straight on the alleged decision of the British Methodist Conference to go beyond recognition and acknowledgement, to regularize same-sex, co-habitation and divorce within the church, Most Rev. Dr. Boafo indicated that the Methodist Church of Ghana disassociates itself from such a decision.

He said the choice to accept same-sex relationships would amount to the reversal of long-standing Christian beliefs on marriage and sexuality and the normalization of moral behaviour that the Christian Church has historically rejected as contradictory to God’s Word.

“The Methodist Church, Ghana, has not amended her position on marriage as a covenant between one man and one woman and neither do we permit co-habitation by unmarried couples nor encourage divorce by Christians,” he emphasized.

“This is what we believe and this is what we ask our ministers, lay preachers, evangelists and other agents to preach and hold on to. If marriage is given by God, then obviously the institution ought to live within the context of God’s word.”

Most Rev. Dr. Boafo stressed that the Methodist Church, Ghana, belonged to an evangelical faith that upholds the integrity of the Bible and the pursuit of the life of holiness.

“Marriage, as far as the Methodist Church, Ghana, is concerned is a covenant ordained by God to be, strictly speaking, observed between a male and a female only. Historically, there has been no exception to this rule in the Church and the Methodist Church, Ghana, disassociates herself from any decision that contradicts the teaching of the Bible on sexuality and marriage,” he stated.

The church urged government not to entertain such lifestyles.

“We hope that our government and politicians will take note of these trends, thread consciously and not allow themselves to be pressured under the guides of receiving more aid/funding to give in to these modern lifestyles that overthrow our cultural values and Christian principles as a nation,” he averred.

In recent times, there has been subtle pressure on politicians and government to legalize same-sex marriage in Ghana but there is an overwhelming opposition to the recognition of this lifestyle as a normal behaviour.

At the forefront of the opposition are religious bodies who have in no uncertain terms vehemently opposed the topic of same-sex marriage and its possible legalization in the country, basing their arguments on the fact that such lifestyles are alien to Ghanaian beliefs and culture.

Framework On Responsible Journalism To Be Ready November