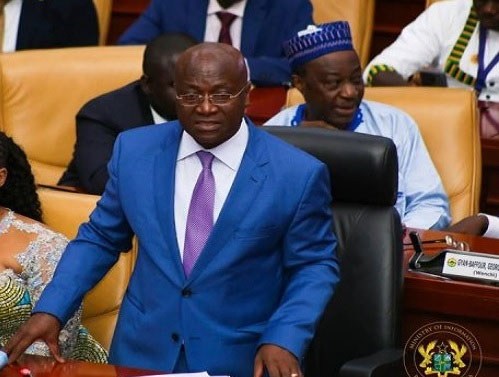 There were fireworks in Parliament yesterday over the passage of Budget Statement and Economic Policy of the Government for the year ending 31st December 2022.

The approval subsequently nullified the purported rejection of the same budget by opposition National Democratic Congress (NDC) MPs last Friday as supervised by the Speaker of Parliament, Alban Bagbin, who is a card-bearing member of that political grouping.

Drama unfolded when the Minority NDC decided to stay out of the chamber as the Majority Caucus, New Patriotic Party (NPP) approved the budget yesterday.

In what looked like a cat and a mouse game, 138 MPs, 137 of them from the NPP, and one Independent MP, approved the budget which was supervised by the Second Deputy Speaker Joseph Osei-Wusu (NPP MP for Bekwai) in the absence of Speaker of Parliament Alban Bagbin.

Last Friday, the NDC hit the rooftop, claiming they succeeded in rejecting the 2022 budget, but the Majority Caucus (NPP) fired back saying the whole exercise supervised by Mr. Bagbin, was unconstitutional because the Minority Caucus did not have the quorum to take such a major decision.

Per the 1992 Constitution, current Parliament’s quorum is just 1/3 of the 275 members and to take such a decision, Parliament needs more than 1/2 of members, which is currently set at 138 after the 2020 general election.

The NDC has 137 members and the NPP also has the same number (137) and there is one independent MP.

However, the NPP has the majority in Parliament because the Independent MP called Andrew Amoako Asiamah from Fomena Constituency in the Ashanti Region, who is now the Second Deputy Speaker, and first entered Parliament as NPP MP, identifies with the NPP and therefore, on January 7 when there was a hung in Parliament, he decided to join his own people (NPP) to form the majority for the 8th Parliament of the 4th Republic (2021-2025).

Matters started shaping up in the morning yesterday when there were reports that the leadership of both NPP and NDC were meeting to build consensus.

The crunch meeting was later said to have ended in a stalemate.

The meeting was said to have been held in the presence of some key government officials, especially from the Ministry of Finance, and they had hoped to come to a consensus over certain aspects of the 2022 budget.

Majority Leader and Minister of Parliamentary Affairs Osei Kyei-Mensah-Bonsu and Kwaku Kwarteng, former Deputy Minister of Finance and Chairman of the Finance Committee were part of the Majority Caucus at the meeting.

The meeting started as early as 8 am and was suspended at about 11 am for further consultation among the two sides, resuming after an hour.

Both parties in principle reportedly agreed that there should be a budget for 2022 so that government business do not grind to a halt but there was still some pockets of disagreements as far as aspects of the budget is concerned.

Initially, it was stated on the green paper which is the official votes on proceedings in Parliament, that Sarah Adwoa Safo, NPP MP for Dome Kwabenya, was absent with permission but at about 3:35 pm she was seen at the precinct of Parliament House.

In the chamber, sitting was suspended at 1:25 pm and was scheduled to resume at 4:05 pm same day.

As at 3 pm, all the NDC MPs were still outside the chamber but a good number of the NPP MPs were filing into the chamber to begin the business of the day.

At 4:00 pm, the First Deputy Speaker, Joseph Osei-Wusu (NPP Bekwai) siting in for Speaker Bagbin, entered the chamber to preside over the proceedings.

It was on that basis that Mr. Bagbin had pronounced that the NDC MPs had rejected the budget which the NPP MPs later said it was unconstitutional.

After the declaration, he jetted to Dubai in the United Arab Emirates, ostensibly for a medical check-up.

The motion as appeared on the green paper yesterday indicated “that this Honourable House approves the Budget Statement and Economic Policy of the Government for the year ending 31st December 2022.”

The official votes on proceedings document last Friday is showing that Speaker Bagbin erred in concluding that based on the number of MPs in the chamber last Friday, the Budget Statement and Economic Policy of the Government for the year ending 31st December 2022, as presented by the New Patriotic Party (NPP) administration through Finance Minister Ken Ofori-Atta, had been rejected.

On the green paper indicating ‘Minutes of the 20th sitting of the third meeting of Parliament,’ dated Friday, November 26, 2021, the House counted “Ayes –Nill” and “Noes – 137,” and that showed clearly that the NDC did not have the quorum to decide the way they did.

The actual number needed for a budget to be rejected was 138 and above, and the 137 clearly indicated that the NDC cannot hold that they rejected the 2022 budget.

Yesterday, in deciding on the motion to adopt the budget as moved by Mr. Kyei-Mensah-Bonsu and seconded by Deputy Majority Leader Alexander Afenyo-Markin (NPP MP Effutu), the house first reversed last Friday’s decision.

First Deputy Speaker, Mr. Osei-Wusu, said its earlier decision which saw the rejection of the budget did not follow the 1992 Constitution and the Standing Orders of Parliament.

Ruling on an application submitted by the Majority Leader, Osei Kyei-Mensah-Bonsu to quash the decision, the First Deputy Speaker said, “My attention has been drawn to the record at page 10 of the Votes and Proceedings of Friday, 26th November, 2021 which shows that the confirmed numbers of the Members of Parliament at the time the question was put was less than half of all the Members of Parliament.”

“Clearly, the record shows that 137 Members were present. That number is less than 50 percent of all Members of Parliament. As stated already, Article 104 (1) and our Standing Order 109 (1) regulate the process of decision making in the House.”

“The combined effects of this provision in the Standing Orders are that the question shall not be put on any matter for decision to be made unless at least half of all the Members are present in the Chamber,” he stated.

The First Deputy Speaker said the Rt. Hon. Speaker, Mr. Bagbin, who was presiding at the time before the question was put, appeared not to have averted his mind to this constitutional and procedural requirement.

“I am certain in my mind that given his very varied experience and expertise in parliament he would not have followed to this error if his attention had been drawn to this constitutional requirement.”

“Subsequently, the vote and declaration are also hereby declared to be of no effect,” Mr. Osei-Wusu declared.

Finance Minister Ken Ofori-Atta was in the chamber and delivered a statement saying that the Ministry was committed to appropriately correct the language in the Arker Energy deal during meetings of the Finance Committee.

He assured the house that the committee would be used to address their concerns as enumerated in their open letter to the public, adding that had been agreed that further consultation would be done on the Agyapa Royalty deal as well.

Last Friday when Mr. Ofori-Atta sought to explain further certain decisions taken in the budget, he was ordered out by Mr. Bagbin, a move which sparked fury among the Majority Caucus because they said the Speaker had let in NDC General Secretary Johnson Asiedu Nketia in the gallery but was picking on the Finance Minister who is a key stakeholder in the process.

NDC in the past walked out when Parliament was deciding on decisions bothering on the Electoral Commission, National Health Insurance Scheme, drones to supply essential medicines in remote areas, free SHS among others.

When Ghana discovered oil in commercial quantities, the NDC said cynically that it was palm kernel oil and disrupted proceedings of the house but later they assumed office and started mismanaging the oil cash.